5 Sneakers That Symbolize the Evolution of Kentucky Basketball 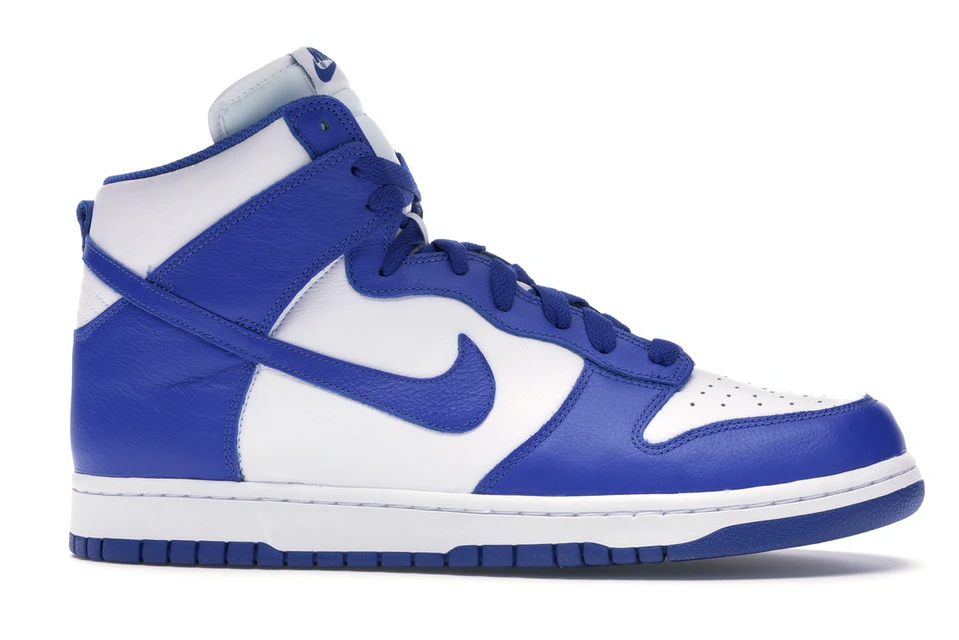 It may have not seemed certain in the moment, but in 1985, Nike was on its way to taking over performance basketball for the next three decades.

Commercially, it all started in April as the brand released the Air Jordan 1 to the world. After an amazing All-Star Weekend from rookie rebel Michael Jordan, the NBA did Nike a service by banning the Black/Red sneakers from in-game play. Naturally, Nike leaned into this, selling droves of Air Jordans all year to kids who wanted to break the rules.

The next step was conquering the college game. Calling in Peter Moore, the same poster pioneer who brought color to the Air Jordan franchise, the graphic designer tweaked Michael’s model oh so slightly to form the Nike Dunk later that fall. It just so happened that the same season the Dunk was set to hit college courts, Eddie Sutton was arriving in Lexington to take over at Kentucky.

The timing was sweet.

Though historically tied to Converse on the court, Kentucky had a new man in charge with new priorities in mind. The first was having Nike outfit the Wildcats as Sutton himself was paid $125,000 a year by the Swoosh to serve as a member of its board of directors. Instantly, the Dunk was the shoe of choice for Sutton’s squad, sold as the “Kentucky Dunk” in local Lexington mall ads.

Wildcats stars such as Kenny “Sky” Walker wore the Dunks while doing what both names suggested consistently in Rupp Arena. The Dunk proved the dawn of both Sutton and the Swoosh, with the school’s top tier hoopers wearing the Air Force II and Air Force III in years to follow. Unfortunately for Sutton, the 1989 Emery Scandal ended his run on the sideline in Lexington. Keeping close ties, Sutton took a job with Nike in which he watched practices for Swoosh sponsored schools before returning to coaching with Oklahoma State.

To this day, the Sutton approved Nike Dunks live in folklore amongst Kentucky fans and sneakerheads, proving that sometimes being timeless can all come down to timing. 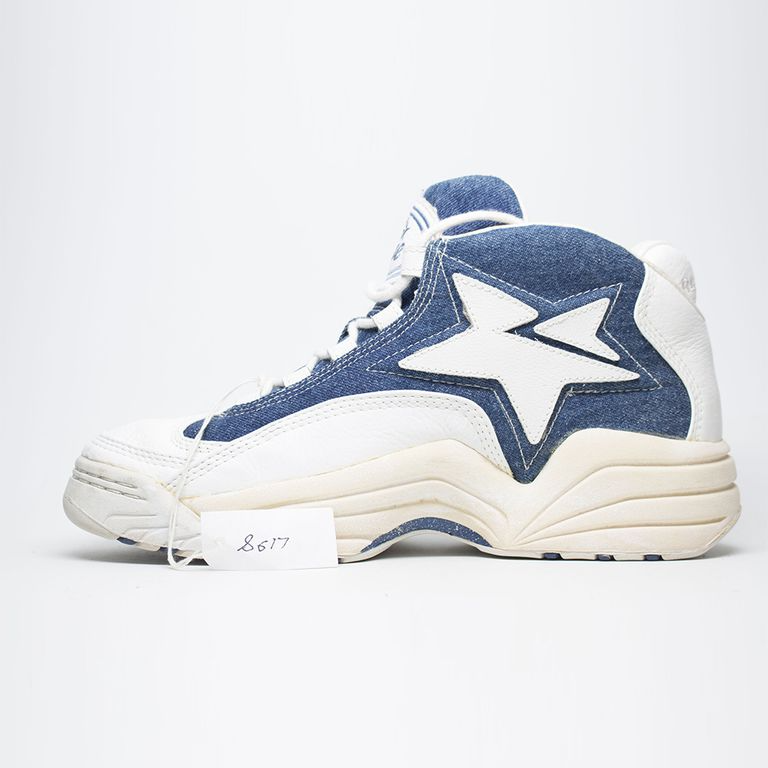 Following the 1989 Emery Scandal and the forced resignation of Eddie Sutton, Kentucky men’s basketball was in dire straits. Still seeing the expectations of a top tier program locally while being banned from postseason play nationally, few were fearless enough to lead the Wildcats out of their darkest days.

Fortunately for Kentucky, it wouldn’t take few, just one.

Coach Rick Pitino was no stranger to pressure. Manning the sidelines for the New York Knicks, the former frontman for Providence possessed the fire to reignite Rupp Arena. With Sutton went the team’s Swoosh sneaker deal and with Pitino came a return to classic Converse.

In the early 1990s, Pitino’s passion proved more infectious to recruits than scandal scared them. Despite having to miss posteaseason play for two straight seasons, Pitino brought in the likes of Jamal Mashburn and Tony Delk. The unwavering Wildcats worked their way up to a #1 ranking heading into the fall of 1994 with outfitter Apex putting together bold uniforms and Converse keeping them laced in team takes.

For the 1995-96 season, the stars were set to align as Apex was bought by Converse and an integrated head-to-toe look was to be presented. Infamously, Converse closed down Apex due to poor financial planning by both parties. Famously, Converse kept it tight for Kentucky by outfitting their Untouchables team in denim jerseys, shorts and matching sneakers.

Dubbed the Converse Cons Blue, the team exclusive shoes appeared on the feet of the 1996 NCAA Championship team that returned Kentucky to college hoops glory and placed nine players in the NBA. Kentucky basketball was back and the bluegrass state had blue jean sneakers to thank. 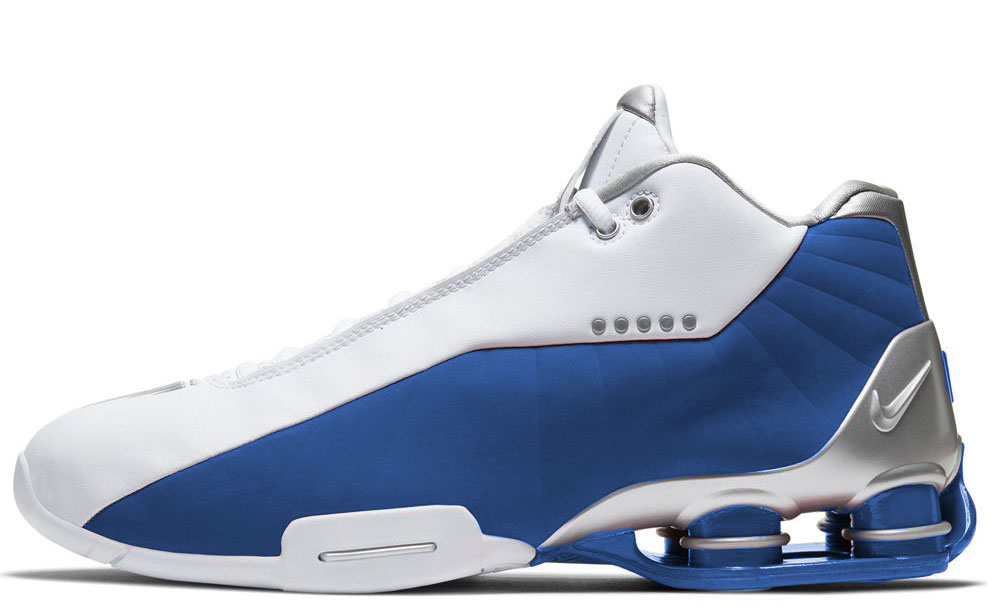 If it wasn’t for a freshman in Foamposites and a big pot of green in Boston, Rick Pitino could’ve joined John Wooden as the only men’s college basketball coach to three-peat. Instead, Mike Bibby bested the repeating champs in 1997 with Tubby Smith taking over and taking down Utah in 1998.

With Tubby at the helm, the Wildcats had a new style of play and a new style of shoe. After Pitino put Kentucky back on the map and back in Converse, Tubby took the team to Nike for a union that stills tands today.

Act II of the Nike era at Kentucky came to be with the 1998 National Championship team. However, the story started to solidify that fall through a freshman. Tayshaun Prince, a prized prospect out of Compton, California’s Dominguez High School, signed on to lead Tubby Smith’s squad for four years to follow. An instant addition to the rotation, Tayshaun steadily rose in the ranks of the team, conference and country during his days in Lexington, earning SEC Player of the Year and All-American honors by the time it was all said and done.

Over the course of his career at Kentucky, Tayshaun showed out in various Nike Basketball models with strong team shoe ties. From the Foamposite-inspired Signature Player to the Team Max Zoom to the KG III, the Compton kid with guard game and a center’s wingspan was able to rock anything and everything from Nike with class and steeze.

Still, it was the Nike Shox BB4 that signified Kentucky’s total rebrand to Nike during the 2000s Tubby Smith era. The marriage of outer-space Shox technology with dusty blue suede sidewalls proved that the future of footwear and the history of Kentucky basketball could co-exist. During that time, the likes of Stanford and Michigan State played in their team-toned Shox BB4s, adding college cache to the Vince Carter catapult.

For fans in Lexington, it will always be Tayshaun Prince’s size 14 Shox that sprung Kentucky to an evolved identity. 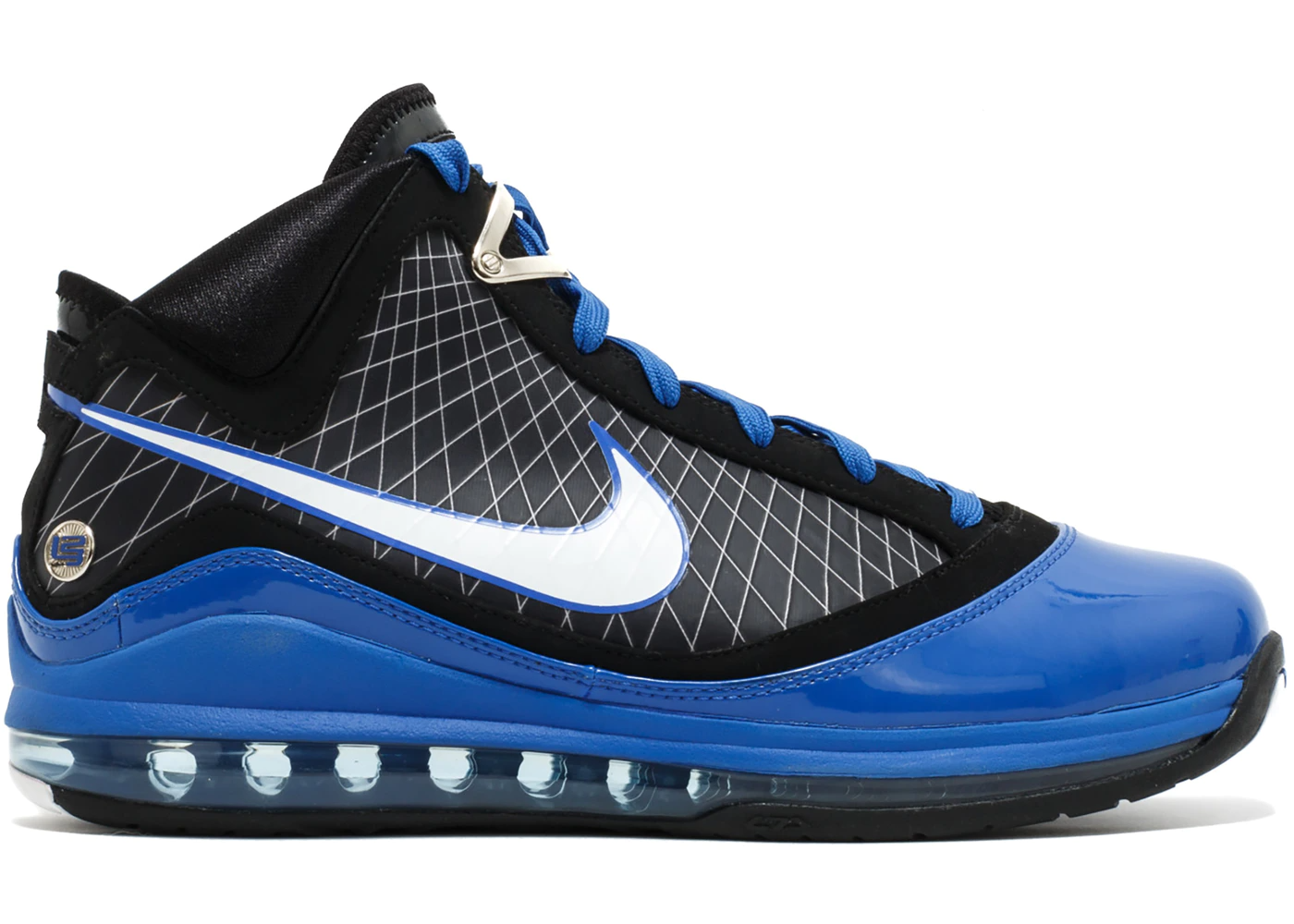 When John Calapari arrived at Kentucky, so did the best basketball players the world had to offer. Plucking North Carolina native John Wall from local legends like Coach K and signing DeMarcus Cousins all the way away from Alabama, a new regime was here, set to dance on any and every existing establishment.

Less bluegrass, more hip hop, Coach Cal kept the competition levels in practice at an all-time high by having top recruits go at it day after day with promises of payouts at the next level. While it wouldn’t take long for Wall, Cousins and kids of their ability to take their talents to the NBA, they’d expeirence pro perks in college thanks to their sponsors.

The Nike Air Max LeBron 7 PE introduced a new definition of power. In the 80s, college coaches signed sneaker deals with big brands themselves while pro superstars inked their own deals and donned branded apparel on court. Heading into the 2010s, Coach John Calapari was leveraging his own relationship with LeBron James and their shared sponsor of Nike to outfit his young studs in team takes the world could only witness on TV.

Coinciding with the return of UK basketball and the rise of LeBron’s signature line, the Nike Air Max LeBron 7 Kentucky PE couldn’t have come at a better time. Wall wore the exclusives in a home game against Vanderbilt with LeBron in attendance, leading the #1 team to victory with 13 points, backed by a double-double from Cousins.

Since that courtside seating and PE seeding, LeBron has been a friend to the program despite never playing a game for it. Kentucky continues to leverage competitive practices, famous friends and exclusive sneakers as Coach Cal’s kids continue to cut down nets and get NBA owners to cut big checks. 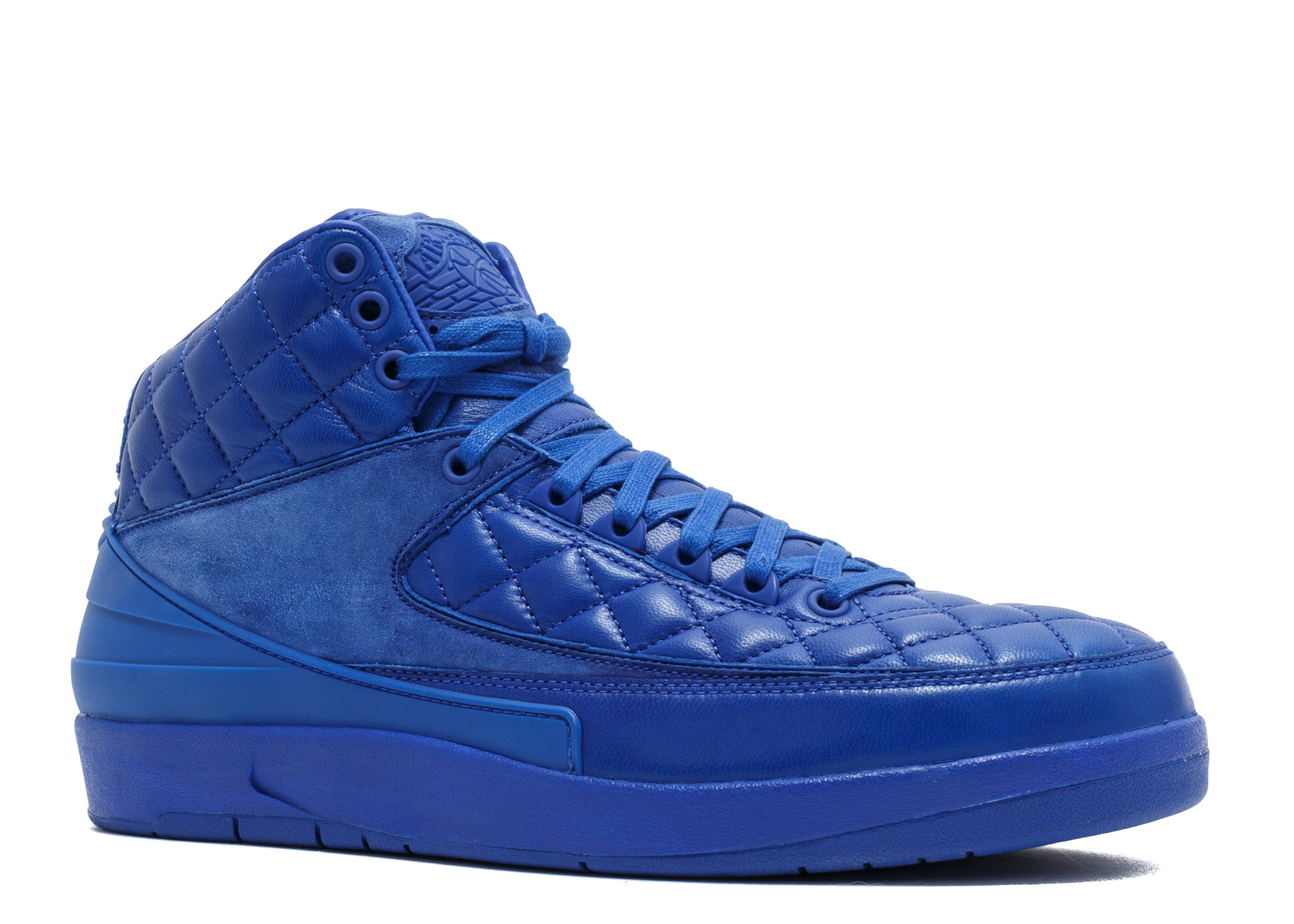 On optics, industries and average household earnings, Lexington, Kentucky might not mirror the fast pace, plastic faces and palm trees synonymous with Southern California. Still, by the mid 2010s, the men’s basketball program put Lexington into a lexicon of star-studded prestige that could be considered Hardwood Hollywood.

Not commonly confused with the Staples Center or Madison Square Garden, Rupp Arena under the leadership of John Calapari catered to crowds adorned in blue and white facepaint, yet still creating a Where’s Waldo residence of rich and famous folks. Look closely and you’d see Ashley Judd jumping in on a cheer. Pan to the courtside seats and you might find LeBron James. Attend Midnight Madness, and yup, that’s Drake taking part in layup lines.

Don’t get it twisted, those that bled blue since the days of Sam Bowie and Rex Champman kept the same energy when it came to chants, team intel and engagement. As alluded, however,

Coach Cal’s larger than life deamanor brought a new lens to Lexington amplified by a new tier of recruits.

From John Wall to Anthony Davis to Karl Anthony-Towns, Calapari’s players were putting numbers on the board before landing atop the lottery. Red hot tournament runs had sharp shooters like James Young signing to RocNation Sports and sitting aside Rihanna. One and done dandies such as Shai Gilgeous-Alexander, Tyler Herro and De’Aaron Fox found themselves readying their games for the next level while working on their wardrobes for League Fits between classes.

From practice to preseason, The Big Dance to Draft Day, Kentucky was operating at an all-access level that was must-see TV and must-like IG. Always on camera, the teenage talents weren’t afraid to hide their showtime sauce despite their assumed lack of seasoning. Clearly, they were refining their recipe.

This couldn’t have been clearer in the spring of 2015. A sixth man in minutes rocking five figure footwear, freshman Devin Booker broke out the highly coveted Don C x Air Jordan 2 not to flex on the ‘gram, but to get buckets in a game. Doing so with Tyler Ulis in a rivalry matchup against Florida and then again against Wisconsin in the Final Four, the audacity of hooping in the Chanel-inspired collaboration spoke to the confidence of a kid who knew how good he was before the world did.

After all, what’s scuffing up a pair of thousand dollar Jordans when you’re going to make millions for years on out? Now an Olympic Gold Medalist, NBA All-Star and yes, dating supermodel Kendall Jenner, Devin Booker is the American Dream when it comes to the new era of Kentucky basketball and the most famous face of the program.

The Don C x Air Jordan 2? Those are the feet, laying the footprints for the next Wildcat kid who can’t wait to up the price and audacity in the new NIL landscape.