Before a sellout crowd of 19,375 at Madison Square Garden and 2.6 million viewers at home, Syracuse and UConn battled to an epic clash. The 84th game in the Syracuse-UConn rivalry featured the Big East’s two premier programs of the 2000s; two Hall of Fame coaches; 209 field goal and 93 free throw attempts; eight players logging more than 50 minutes; six players who recorded double-doubles; eight players who fouled out; and walk-ons playing crunch time minutes.

When all was said and done, the hardwood test of wills finished as the second-longest game in Division 1 history behind Cincinnati’s seven-OT victory over Bradley on Dec. 21, 1981.

The Chucker, High Volume Shooters’ resident historian, revisits a game billed as one of the best games in college basketball history.

Neither team could assert itself through the first 40 minutes.The teams were tied at 10, tied at 20, and never separated by more than 7 points through regulation.

The first OT almost never happened.With 1.1 seconds left in regulation, after UConn freshman Kemba Walker had tied the game at 71 on a rebound put-back, Syracuse’s Paul Harris launched an inbounds pass downcourt. Orange guard Eric Devendorf corralled the pass and nailed a 28-footer at the buzzer. As Devendorf jumped on a courtside table in celebration and his teammates mobbed him, referees went to video review and determined the ball was still on Devendorf’s fingertips as time expired. Referee John Cahill recalls telling Syracuse head coach Jim Boehim that the shot didn’t count: “[Boeheim] was less than happy. I’ll never forget what he said to me – I’ll clean it up for you – but he said, ‘You better be right.’ And I said, ‘I know.’”

Looking back on the historic game, Syracuse guard Jonny Flynn seemed happy Devendorf’s shot was waved off. “If you think about it, if that shot goes in, then the game isn’t … the game. It’s not part of history.”

Jay Bilas, who was on the call that night with Sean McDonough and Bill Rafftery, has called the Syracuse-UConn thriller “the Mount Everest” of games.“It was just a normal fistfight until Devendorf’s shot was waved off, then suddenly a switch was flipped and it went from intense to something magical,” Bilas said.

Walker nearly ended the game after the second OT, but the future NBA star’s 40-foot heave bounced off the back of the rim.Onward to a third OT. There had been only one previous triple-overtime game in Big East tournament history: the 1981 championship game in which Syracuse downed Villanova83-80. That game also featured a Syracuse shooter named Rautins – Leo Rautins, the father of guard Andy Rautins. 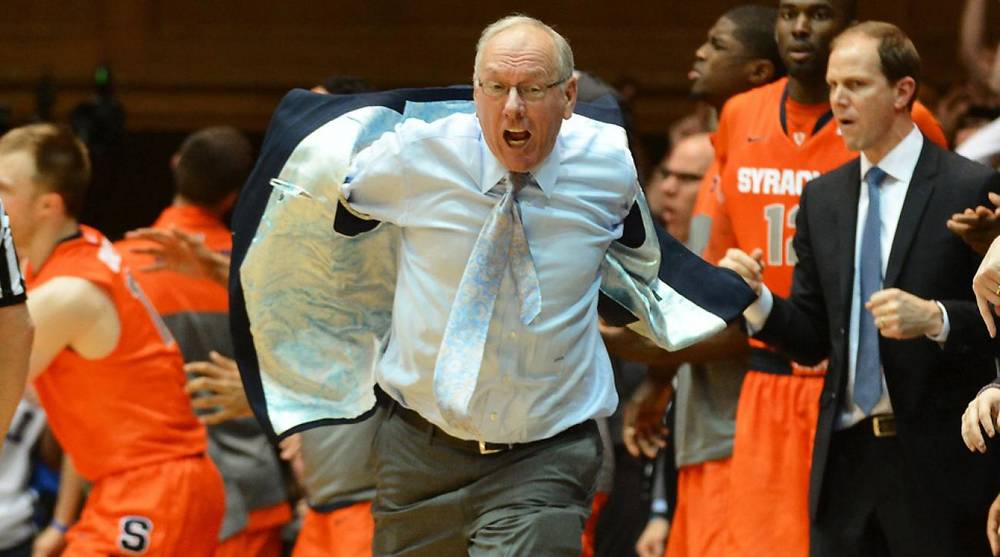 Syracuse never led in any of the five overtimes.It wasn’t until Rautins hit a three 10 seconds into the sixth – and final – OT that the Orange claimed an edge. Thereafter, the Orange surged to victory.

When asked to describe the nearly four-hour long hardwood battle, Boehim said:“I’ve got no words. I’ve never been prouder of any team I’ve coached.”

Calhoun, meanwhile, offered a different perspective:“I’m sure in the summertime I’ll look back at what a historic battle it was. Right now, it’s a loss.” Calhoun and the Huskies could certainly lament lost opportunities. They turned the ball over 27 times and shot 24 of 42 (57 percent) from the charity stripe. By contrast, Syracuse drowned 40 of 51 free throws.

Syracuse guard Jonny Flynn sat only three minutes en route to playing a game-high 67 minutes.“I just wanted to get the game over with,” Flynn said post-game. “I was thinking, ‘Lord, just get this game over with. Whoever wins the game, let’s just get it over with.’” Flynn’s 34 points and 11 assists propelled Syracuse’s victory and a meeting with West Virginia in the Big East semis less than 20 hours later. “I can’t even feel my legs right now,” Flynn said following the UConn slugfest. “It was a tough game, we battled it out, but we have to turn it around – today – and face a tough team in West Virginia.”

Remarkably, Syracuse’s semifinal tilt with West Virginia also ventured into OT.Syracuse ground out a 74-69 victory over the Mountaineers. In the championship game on Saturday evening, however, the Orange ran out of gas against Louisville and lost by 10 to the Cardinals.

Both teams made deep runs in the subsequent NCAA Tournament.Syracuse marched into the Sweet Sixteen before losing to second-seeded Oklahoma and Blake Griffin. UConn, meanwhile, surged into the Final Four in Detroit. There, the Huskies lost in the National Semifinals to Michigan State82-73.

Reflecting on the game years later, Boeheim said this wasn’t just any six-OT game. The long-standing, intense rivalry between UConn and Syracuse made it something even bigger. “Had it been you know, Syracuse-Marquetteor something, it wouldn’t have been the same,” Boeheim said.

Calhoun seemed to agree.“There’s nothing like Syracuse-Connecticut going to the Garden. … It was between the two best programs in the last 20 years in the Big East. And then it develops into that game? I don’t think it’s a coincidence.”