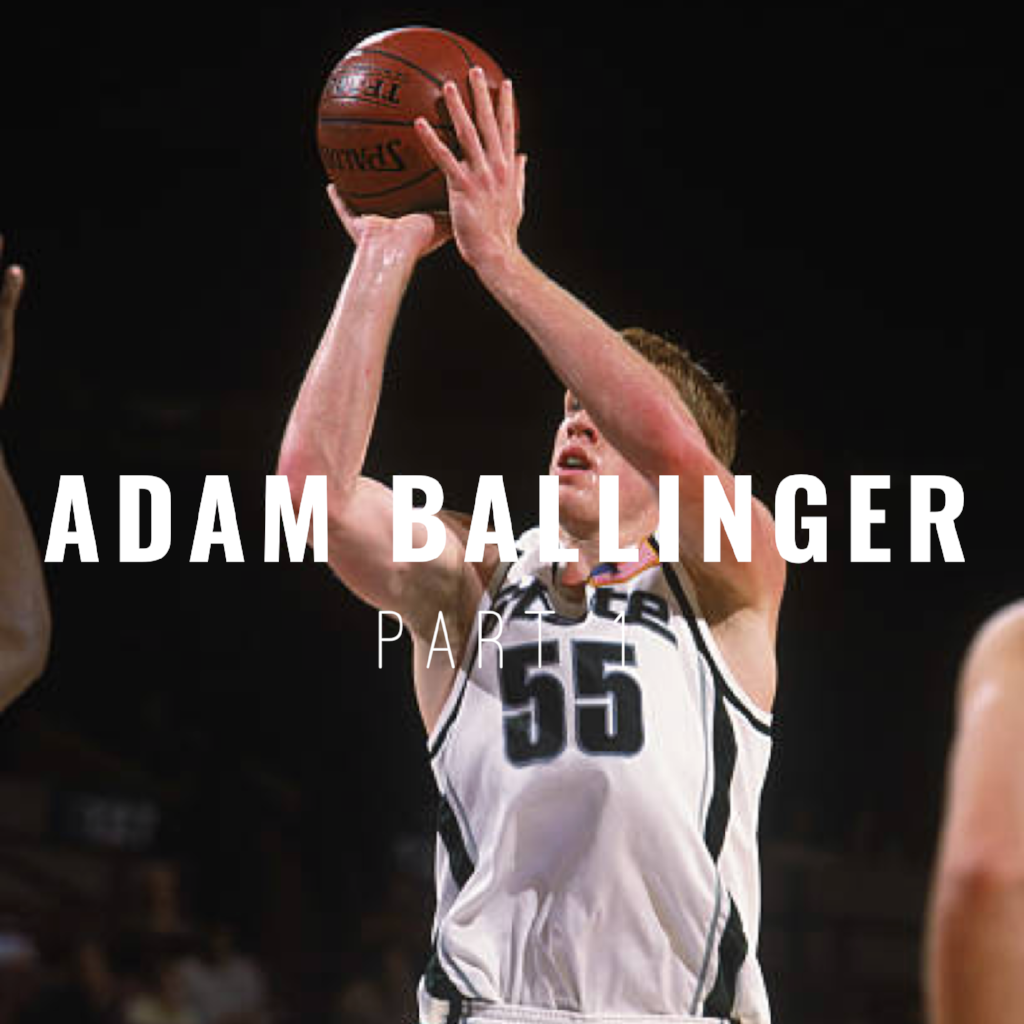 19nine has followed Adam Ballinger Art (adamballingerart.com) for a while on social media and continued talking internally about how to incorporate him into to what we do.  It seemed like a natural fit.  Indiana raised, Michigan State alum, basketball junkie with a talent for drawing caricatures.  Something 19nine has been wanting to get into for quite some time.  After reaching out to him and bouncing ideas back and forth we are proud to release our first collaboration with him (our vintage caricature of Purdue coaching legend Gene Keady).  In doing so we wanted to give him a proper introduction to our customers through  a two part interview with High Volume Shooters.  Be sure to follow him on Instagram (@adamballingerart) and Twitter (@adam_ballinger) and show him some love.

HVS: You're from Bluffton, Indiana and went to high school there.  Tell us about growing up there and what you remember most about playing ball for the local fans.

AB: I had a great childhood growing up in small town Indiana. The High School basketball team was the main attraction and they were the guys I always looked up to when I was little. My best memory from high school ball was the Friday and Saturday nights playing in front of 3500 people alongside life long friends…. And going to Pizza Hut afterwards... that was really fun too!

HVS: Who were your favorite players growing up?

AB: My favorite player growing up was Patrick Ewing and my favorite team was the Knicks. Everyone around me were Pacers fans and I wanted to choose something different. I fell in love with the toughness of those teams. Ewing is now in a tie with Larry Bird as my all time favorite player.

HVS: When we first talked on the phone about a possible collaboration we realized that our paths crossed on the AAU circuit many years ago when you were playing for Bloomington Red and I was playing for Evansville Gold.  Was it around that time that you started to think that basketball could be something you could do professionally or were you still just focused on the game taking care of your college tuition?

AB: BLOOMINGTON RED RULES!!! Professional basketball was a dream then but as college basketball became more of a reality it was my main focus.

HVS: My only goal growing up was to be a good HS player and the top of the mountain would have been being named an Indiana All Star.  For those of us who never get to experience it, in a basketball crazy state where people worship their HS legends, what was it like to achieve that honor?

AB: That is one of the things I'm most proud of in my career. It is a big deal in Indiana and something I'm still very proud of.

HVS: With being an Indiana All Star that means you get recruited by some of the big schools in state and out of state.  What was it like being recruited by the likes of Bob Knight and Tom Izzo?

AB: Bob Knight's presence was incredible.  And Coach Izzo was all class.  Michigan State was the best place for me.

HVS: Announcers and pundits love putting out lists of "hardest places to play" or "toughest environments" in college basketball.  As a player what game at the Breslin stands out to you as the loudest you played in?

AB: Anytime we played Michigan, especially the game we beat them by 63 points.  Yes, I said 63 points!

HVS: What about on the road?

AB: IU was the loudest, the fans feel like they are on top of you.

HVS: Did Mateen Cleaves ever shut up the entire time you guys played together?

AB: He still has not! He was and still is an incredible leader.

HVS: How cool was it having Magic Johnson around the program?

AB: He always made a point of coming back and was always open to talk to anyone of us which I always thought was cool of him.

AB: Being able to win it all in Indianapolis.

HVS: After graduating from MSU you went overseas to play professionally.  What was the biggest adjustment you had to make from playing American basketball to now playing overseas?

AB: In college you have a whole support system, pro ball you are on your own

HVS: How would your game be different if  you were coming up today? Do you like how the game has changed/evolved since your playing career ended?

AB: I would have learned to dribble! The game needs to evolve just like everything else, I like how open the floor is now, great for shooters!

HVS:  That's music to our ears!