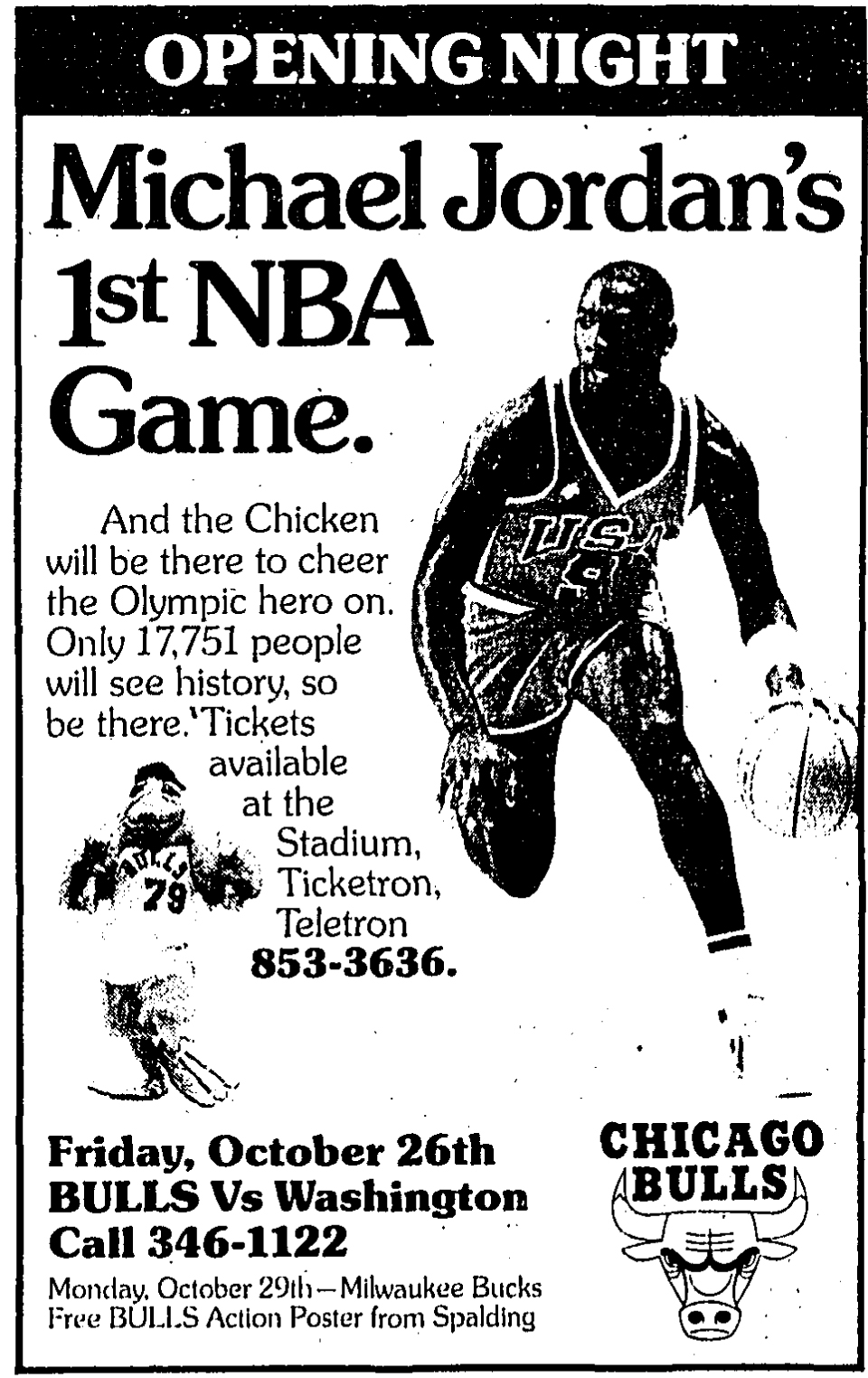 The G.O.A.T. debate is one that continues to circulate. It can be hard to go back and imagine that everyone starts somewhere. While Jordan's career may have had an inauspicious beginning his rookie year was transendent just like the entirety of his career. I read "The Chucker's" version and imagined myself as a kid seeing Jordan for the first time and realizing that the game was promoted as a game where you could see The Chicken and even with that the stadium didn't come close to selling out.

The third pick in the 1984 NBA Draft, Jordan arrived in Chicago with immense fanfare having led the U.S. Olympic team to Gold at the 1984 Games in Los Angeles.

With police escorts, a swelling media pool, and backdoor exits to avoid crowds, Jordan was perceived as the franchise’s superstar savior, the cure to their woes on and off the court. And the Bulls, coming off a 27-55 season, needed every bit of hope and energy in the 1984-1985 campaign, one the team’s marketing folks branded as “The Chicago Bulls: A Whole New Breed” with Jordan as the leading man.

“Michael gives you more hope. He is a motivating factor that changes the whole attitude of the team,” Bulls big man Steve Johnson said of his precocious teammate.

Jordan, of course, delivered on all the promise and hype, beginning with a solid debut in an Oct. 26 victory over the Washington Bullets – the first of his 1,072 career games.

In front of a Friday night crowd of 13,913 at the Chicago Stadium, a gathering that included the famed San Diego Chicken, Jordan recorded 16 points on 5-16 shooting, 7 assists, 6 rebounds, 4 blocks, and 2 steals while playing a team-high 40 minutes in the Bulls’ 109-93 victory.

“In time, you have to figure that Michael Jordan will be the main man,” Chicago Tribune columnist Steve Daley wrote following Jordan’s debut.

In pulling the Bulls to a 38-44 record, an 11-game improvement over the previous season, Jordan started all 82 games and averaged 28.2 points, 6.5 rebounds, 5.9 assists, and 2.4 steals en route to Rookie of the Year honors and a career many consider the greatest of all time.

By the time of his final retirement in 2003, Jordan had amassed six championships, including six Finals MVP awards, to go along with five MVP awards, 10 scoring titles, nine All-Defensive team honors, and 14 All-Star game nods. His presence also spurred a 610-game sellout streak for the Bulls that crossed three different decades (1987-2000) and two different stadiums.

So, yes, that Friday night affair against the Bullets was indeed “a Bullish beginning.”