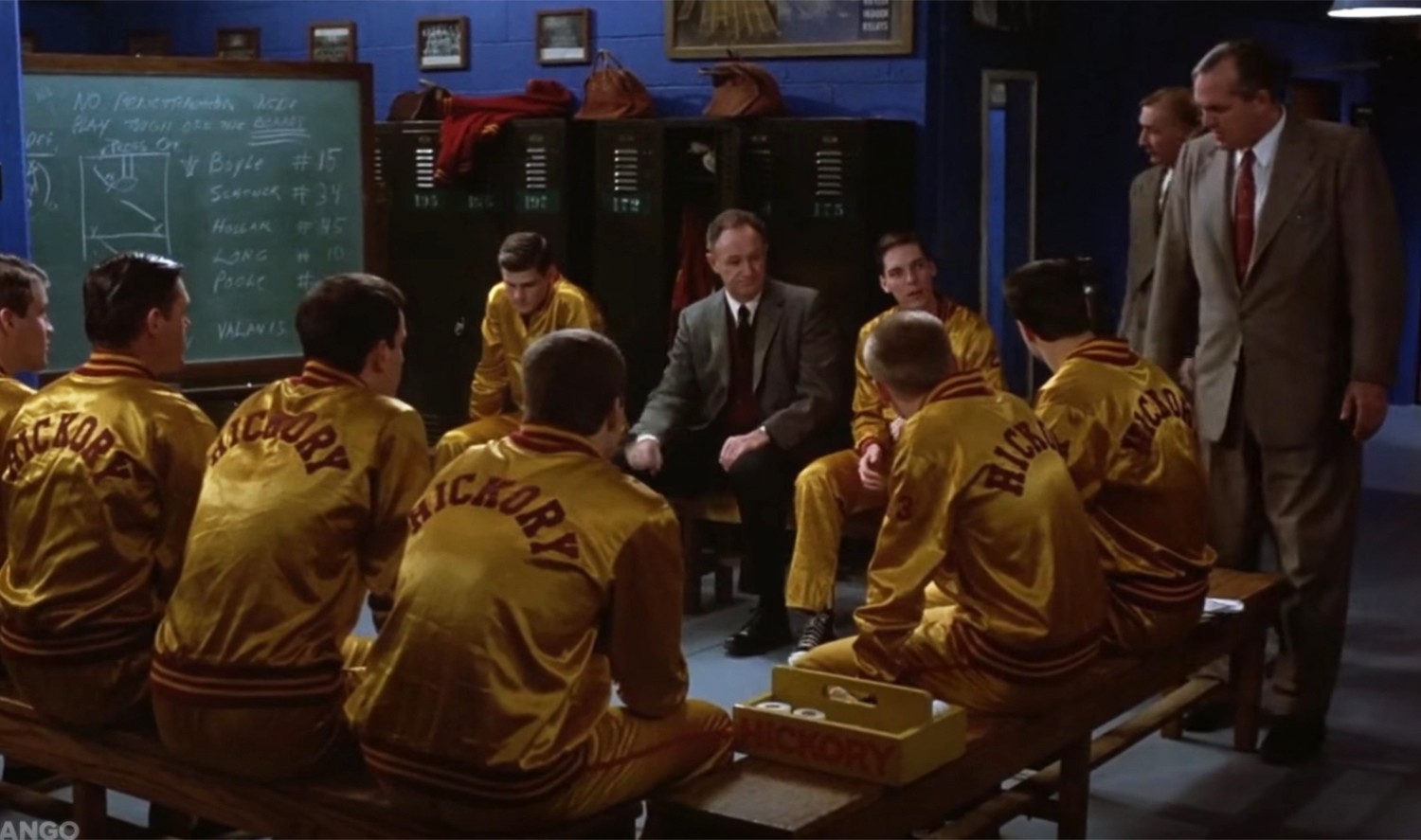 Read Part I and Part II

More little-known facts about the greatest basketball movie ever made from The Chucker, High Volume Shooters’ resident archivist.

In its march to the championship, the real Milan High team topped a Crispus Attucks squad in the state semifinals that featured future NBA star Oscar Robertson. In the film, Hickory defeats South Bend Central for the title. Ray Crowe, the same man who guided Crispus Attucks against Milan, coached the South Bend team against Hickory. So sadly for Crowe, an accomplished coach, he suffered losses to both the real Milan and the fictional one.

The “Hoosiers” crew attempted to precisely recreate Bobby Plump’s game-winning shot for the camera, but ditched the effort.

The film’s leaders tried to recreate many aspects of Milan’s storybook season, right down to the spot on the floor where Plump hit his game-winning shot in 1954. That spot on the floor didn’t work, however, and the crew pushed Maris Valainis, playing Jimmy Chitwood, further from the basket to intensify the drama. Though Valainis struggled to hit the shot in warm-ups, he nailed the jumper on his first attempt when the cameras rolled.

After Valainis’ game-winning shot dropped, “Hoosiers” director David Anspaugh realized he forgot to tell people how to react. “So everything you see in the movie – the cheerleaders crying, the South Bend Central players pounding the floor, Ray Crowe consoling his players, all of our guys jumping up – that was totally spontaneous,” Anspaugh once said. “All that stuff you see when the ball goes in is pure, unbridled hysteria and joy. They were cheering for him in real life to make that shot.”

“Hoosiers” writer Angelo Pizzo and Anspaugh skipped the Oscars, but for good reason.

Following “Hoosiers,” Pizzo and Anspaugh went on to produce another revered sports film.

Seven years after “Hoosiers” debuted in theaters, Pizzo and Anspaugh collaborated on another beloved sports film: “Rudy.” That film chronicles the journey of Notre Dame football walk-on Dan Ruettiger. An Indiana University alum, Pizzo admits he struggled internally to do anything that made the Fighting Irish look good.

In 2003, Kent Poole, who portrayed guard Merle Webb in “Hoosiers,” was found dead by his own hand. The Crawfordsville, Indiana, resident was 39. Before being plucked from a group of some 1,000 hopefuls who auditioned for a spot on the Hickory Huskers, Poole helped lead Western Boone High’s deep run in the 1982 Indiana state tournament.