Before Melo Landed at Syracuse 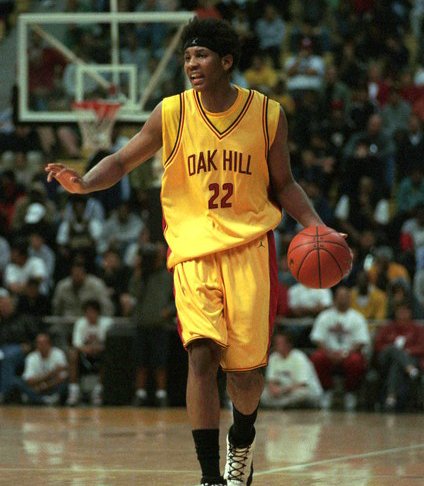 Before leading Syracuse to the 2003 NCAA title, Carmelo Anthony had to navigate adolescent issues, develop his game, and hit the books. The Chucker, High-Volume Shooters’ resident historian, dives into Melo’s pre-Syracuse life

Anthony wasn’t a headline-grabbing prodigy. Rather than attend Dunbar High, the Baltimore basketball factory that produced the likes of Sam Cassell, David Wingate, and Muggsy Bogues, Anthony enrolled at Towson Catholic, a private school located 13 miles away from his Baltimore home. As a freshman, he played on a JV team that won but one game.

Anthony struggled as a young high schooler. He began sprouting as a freshman and mushroomed to 6-7 as a sophomore, a growth surge that forced him to play hurt and miss games. He also struggled academically at Towson. Steadily, though, Anthony’s game developed and he began attracting the attention of college coaches.

As a junior at Towson Catholic, Anthony hit his stride. He averaged 23 points and 10 rebounds and was viewed as one of Baltimore’s top prep prospect in decades. Anthony, however, didn’t stick around. That spring, he decided to attend Oak Hill Academy, the Virginia-based basketball powerhouse that produced the likes of Rod Strickland, Jerry Stackhouse, and Ron Mercer.

An unofficial trip to the Syracuse campus and the Carrier Dome in April 2001 was all Anthony needed. Though still months away from beginning his senior year at Oak Hill, Anthony pledged his commitment to the Orange over Maryland, North Carolina, Virginia, and Villanova. He was Cuse’s highest-rated recruit since Winfred Walton signed in 1996. Melo joined another early commit, a gritty point guard from Scranton, Pa., named Gerry McNamara in Syracuse’s heralded 2002 recruiting class.

The summer prior to his senior year, Anthony went from well-regarded prospect to one of the nation’s premier talents. He led Team Nike USA to the World Junior Basketball Tournament title in France, earning MVP honors in the process. During a one-day pit stop at the heralded Adidas ABCD camp, Anthony impressed against Lenny Cooke, a consensus top-five player seemingly destined for the NBA. “It feels good with all the eyes on me,” Anthony said after an efficient 14-point performance against Cooke solidified his ascent up the national player rankings.

By the end of summer 2001, some evaluators had Anthony ranked as the top player in the country, ahead of notable talents like Amar’e Stoudemire, Raymond Felton, and Shelden Williams. The swelling attention had Anthony contemplating an immediate jump to the NBA. “If the numbers sound good, like lottery pick, we’ll see,” Anthony said as he began his senior year at Oak Hill. (Notable aside: Perhaps sensing that Anthony might forego college altogether, especially since he still had academic requirements to reach, Syracuse head coach Jim Boeheim and assistant Troy Weaver prepared to fly to Baltimore to meet with Anthony’s mother, Mary, on September 11, 2001. That morning, the FAA grounded all airplanes as terrorists hijacked four separate commercial airplanes.)

In February 2002, Anthony and Oak Hill battled LeBron James and his St. Vincent-St. Mary squad. The two prep stars went back and forth in a narrow Oak Hill victory in which Anthony notched 34 points and 11 rebounds while James overcame double and triple teams to score 36 points.

Anthony completed his senior year with a trip to the McDonald’s All-American game. He scored 19 points in propelling the East squad to a 31-point victory.

While the NBA beckoned and draft prognosticators projected Anthony as a first-round pick, Anthony consistently said he was leaning toward attending Syracuse. After earning a qualifying ACT grade in April 2002, Anthony confirmed his commitment to Syracuse for the fall.

And the rest, as they say, is history.

As freshmen, Melo and Mac would fuel Syracuse’s run through the NCAA Tournament culminating in a three-point, title-game victory over Kansas that gave the Orange its first national championship. Anthony was named the tournament’s Most Outstanding Player.