On Oct. 15, 1971, just three minutes after midnight, 21 University of Maryland basketball players lined the school’s running track at Byrd Stadium for a one-mile run. Coach Lefty Driesell, a charismatic soul some have compared to P.T. Barnum, held a stopwatch. He challenged his players to run a mile under 6 minutes, a not insignificant feat for long-limbed dudes accustomed to sprinting, not endurance running. Car headlights illuminated the track and, as word had circled around the campus about the “Midnight Mile,” a few hundred fans showed up.

Hard to believe, but college’s basketball’s first Midnight Madness didn’t even include a basketball.

Driesell concocted the Midnight Mile as a motivational tactic. By hosting the team’s first official practice at three minutes past midnight, Driesell not only adhered to NCAA rules, but reminded his guys they were getting a jumpstart on the competition. “I knew we were gonna have a pretty good team. I told the players, ‘Look, we’re gonna start the first practice this year of anybody in the country, and we’re gonna be playing in the last game for the national championship,” Driesell told Sports Illustrated’s Seth Davis years later. (The Terps finished the year 27-5, setting a new program record for wins.)

Prior to Driesell’s arrival in 1969, the Terps were largely an also-ran. The program had made only one NCAA Tournament in the previous 45 years. Under Lefty’s charge, however, the program’s fortunes began to turn and excitement accelerated on campus. The 1971-72 squad was led by a pair of standout sophomores in Tom McMillen, a future U.S. Congressman, and Len Elmore, who would become a top basketball analyst after a steady 10-year career in the ABA and NBA. Attendance at the unpublicized Midnight Mile was proof that fans were beginning to take notice of the Terps.

If team members didn’t finish the mile run under 6 minutes, Driesell said they’d have to repeat the challenge until hitting the mark.

Eager to pass Driesell’s test, Elmore recalls some upperclassmen cutting across the grass at the top of the turn. 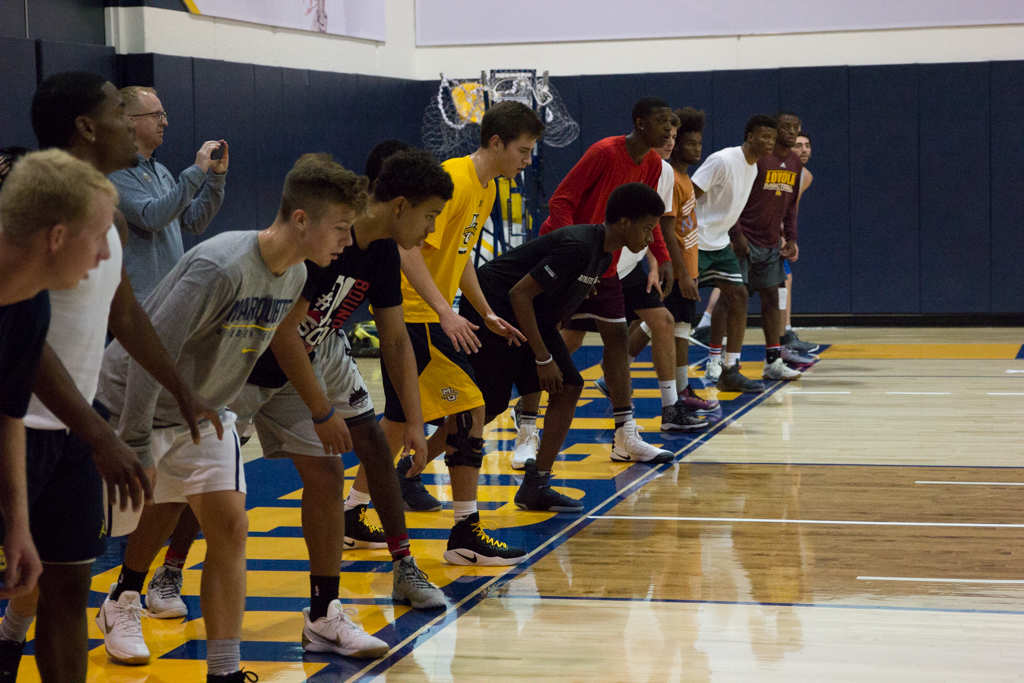 After the run, members of the team simply left the track, a rather unceremonious end to an event that would forever alter the college basketball landscape. Driesell had the season’s first basketball practice – as in one that actually included a basketball – scheduled for 3:00 p.m. that afternoon.

Fueled by the Terps’ 27-win campaign in the 1971-1972 season, Maryland’s Midnight Mile in October 1972 drew an even bigger crowd. The following year, freshman Mo Howard urged Driesell to ditch the mile run in favor of a scrimmage inside Maryland’s Cole Field House. Driesell agreed, yet reminded the players they weren’t off the hook for their mile run.

On Oct. 15, 1973, more than 8,000 fans filled Cole to watch the Terps’ intrasquad scrimmage. Thereafter, the midnight practice on Oct. 15 became a regular feature at Maryland and the modern-day Midnight Madness was born.

Bluebloods like Kentucky and Kansas followed suit with similar events celebrating the start of the college basketball season. By the 1980s, Midnight Madness-styled events emerged a fixture on basketball program calendars across the U.S. Today, many college programs use the events to spur energy for the upcoming season as well as a recruiting pitch. There are corporate sponsorships and philanthropic tie-ins, live music and pyrotechnics, skits and dunk contests. Many are covered by local, if not national, media.

Driesell, who had a flair for promotions, confesses he had no idea what his antic would spark. “I’ve done a lot of crazy things to get attention, but that wasn’t one of them,” Driesell recalled to SI. “I was just trying to get an early jump on practice. I had no idea what it was going to lead to.”

Now engrained in the college basketball lexicon, the phrase “Midnight Madness” has expanded deep into the nation’s consciousness, attached to Black Friday sales, online retail promotions, film festivals, and more. “I should have gotten a patent on it,” Driesell told SI.

On Oct. 16, 2018, 47 years after the original Midnight Mile, Maryland resurrected the tradition. More than 500 students joined the Terps’ basketball team in a mile run around Kehoe Track to honor Driesell’s induction into the Naismith Memorial Basketball Hall of Fame as well as Maryland’s 100th men’s basketball season.