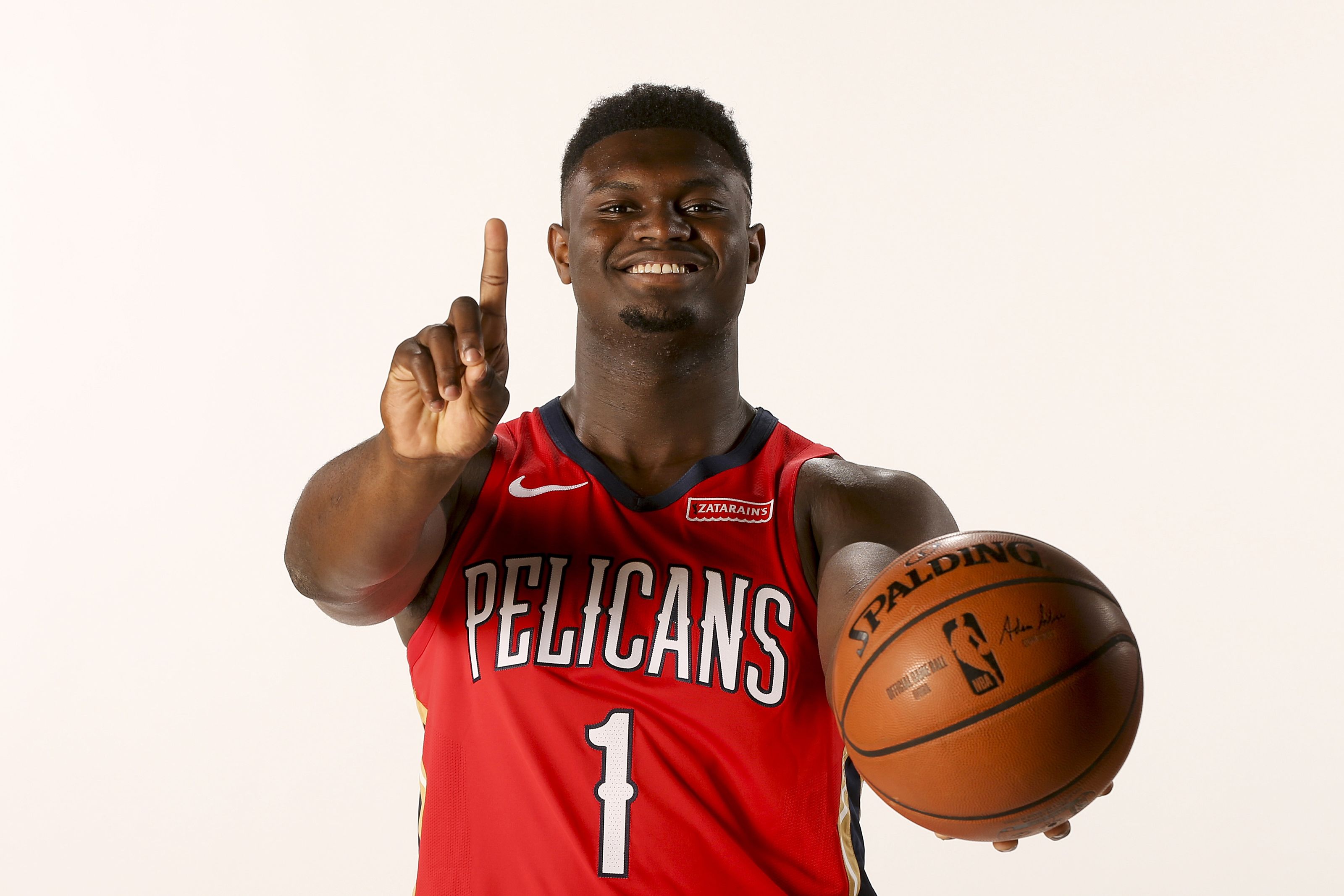 Let's get this started with some criticism of the night that doesn't involve Chauncy Billups comps. If you hadn't heard he compared Rui Hachimura to Kawhi Leonard. 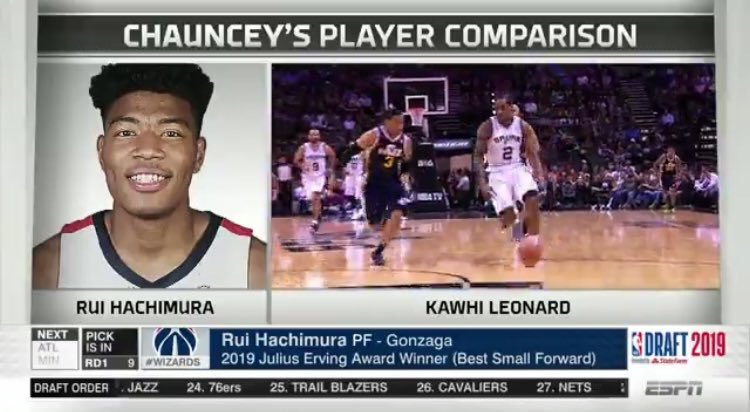 First one is the delayed recap column. I would've succumbed to the pressure to recap the next day as well had I not been delayed by my 40th birthday. I even had to stream the draft to my car while on my way to Nashville and had my wife texting for me. Don't text and drive people there are always other options.

This should simply become a rule where we institute a separation to recap the draft. Really I should wait until after free agency but I'm still too eager. I hope that the NBA decides soon to flip NBA free agency and the draft. It just makes sense and avoids the awkwardness of Hunter wearing a Lakers hat and all other hat related confusion. It also allows teams to draft with their rosters more locked in. It just makes sense. That's why it will probably take another 5 years before this happens. Even with all that it was still a great night. Here is my recap complete with additional thoughts from Josh, Luke our MiniShoo Draft Expert, and others. As always we encourage you to follow us on social media and extend the conversation there... 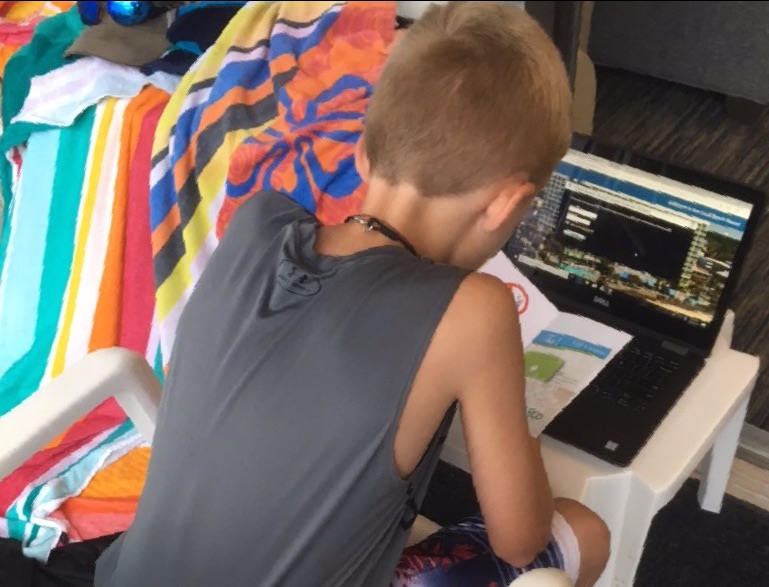 Luke got us started: "This is Luke on dads phone. I'll have my phone later. Are you guys ready for the draaaaft!" "Dad is making cheese fries and he's watching the whole thing. No girls allowed we have our own man cave." I couldn't have been more pumped. The kid could recall picks 1-40 days later too.

1. Pelicans draft Zion Williamson One of the biggest no brainers in years. His interview set the tone for the night. Great kid, lots of emotion. If he can get a jump shot he's going to be special. Even if he doesn't he'll be Ben Simmons.

2. Grizzlies draft Ja Morant I think he's a bit overrated at this point. He's too skinny and I think his jump shot is more broken that people are saying. Still, you can't argue that he was the only player in the history of the NCAA to average 20 points and 10 assists. Those are real numbers and his athletism is out of this world. If he can approximate Westbrook or DRose he's going to be so much fun to watch even if he doesn't make his team that much better.

3. Knicks draft RJ Barrett This is the first time I can ever remember Knicks fans cheering for their draft pick. That probably means that he's going to flame out of the league in 4 years. I hope not though. Maple Mamba is a decent addition to the nickname franchise.

4. Lakers draft De'Andre Hunter (Lakers are currently in discussions to trade this pick to the Pelicans, who reportedly will trade the pick to the Hawks)

14. Celtics draft Romeo Langford First, want to shout out a double win on Romeo. Both Luke and I predicted him in the lottery, in fact, HVS called out that he would likely end up with the Celtics in last years draft recap! 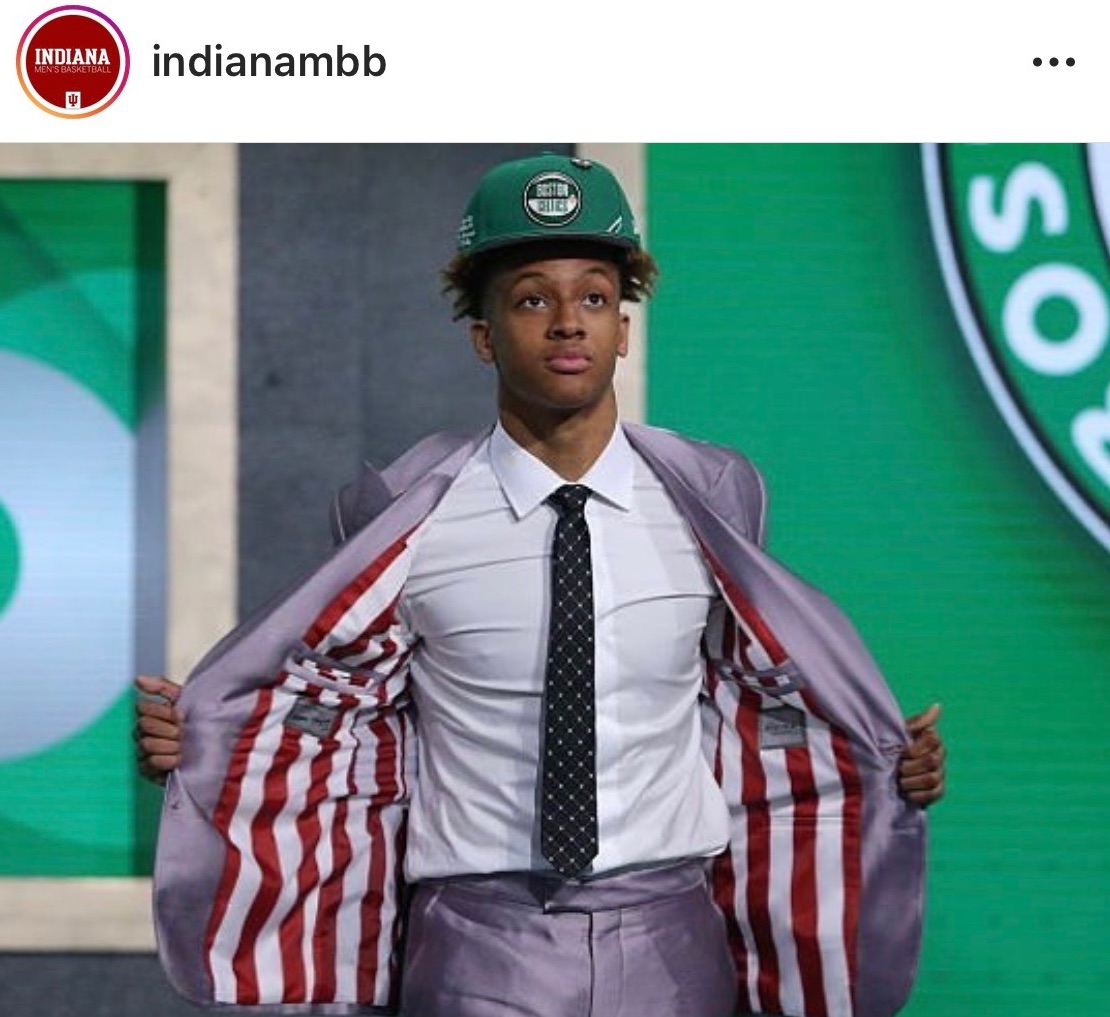 25. Trail Blazers draft Nassir Little Everyone thought he should go no later than the Pistons. I actually thought he would go ahead of Romeo potentially. I think the Blazers might have a steal here. He also seems to be a natural fit at this point. Although my take at the moment when asked was. "I don't love super athletic guys in college that can't average 10 points a game." Meanwhile, Shoo Sr. said, "He shouldn't go in the first two rounds of the draft." His son had to relay that there are only two rounds.

11. Timberwolves draft Cameron Johnson (Timberwolves are currently in discussions to trade this pick to the Suns) This is why the recap should be days later. We all loved this pick at the moment. High character guy and the best shooter in the draft. Looking back they could have got him later and he has some serious medical red flags. It has to be mentioned that he is actually older than Booker who's already on his second NBA contract. While there are concerns with him it does highlight how important shooting has become. Teams are now willing to entertain risks if it means getting a great shooter. Johnson is said to be the best shooter in the draft. At 11 he'd better be.

Josh broke into the conversation trying to convince me to cheer for players instead of teams in the NBA. He might have a point. If I could be more of an agnostic I might not have been apoplectic at this point in the draft thinking that the Bulls were about to miss out on all of the top point guards. I might also enjoy the NBA even more. They ended up with...

7. Bulls draft Coby White I think this is a fine pick for them. I was a bit worried during the telecast when they said his measurables were that of a 6'1" guard despite the fact that he's 6'4" I needed Luke to explain to me how that worked and calm me down. He's fast though maybe even Ty Lawson fast.

5. Cavaliers draft Darius Garland This worked out so well the first time with Kyrie and Dion they thought why not try this again. Sexton will be traded for pennies on the dollar in a couple years and become a solid contributor for some other team.

6. Suns draft Jarrett Culver (Suns are currently in discussions to trade this pick to the Timberwolves) Like this pick, if they can move Wiggins. Like it less, if they have both on the team but at some point, Kat needs a sidekick.

8. Hawks draft Jaxson Hayes (Hawks are currently in discussions to trade this pick to the Pelicans) Luke "That guy is going to keep Romeo out of foul trouble." Not great to have this as your most important skill if it keeps Zion on the court for more highlights I'll take it.

9. Wizards draft Rui Hachimura Perplexing pick until you realize that Washington still has no GM and no hope. They are well positioned to go for the number 1 pick next year.

10. Hawks draft Cam Reddish Like him at this point in the draft. I still think he has huge bust potential but then again in my best Billups voice maybe the Hawks just picked up Klay Thompson, I mean young Klay Thompson.

12. Hornets draft PJ Washington Another solid pick that should keep them solidly around the 8th seed. I hope for the sake of their fans they resign Kemba.

13. Heat draft Tyler Herro Herro again hits the sweet spot of the shooting control chart. He's from a blue blood school. Can stroke it from outside. He's from a small town and a hard worker. He referenced CJ McCollum as one of the players he studies. If he can approximate CJ the Heat will have a steal.

Where the draft was won outside the Lottery & Spider-Man suits.

21. Thunder draft Brandon Clarke (Thunder are currently in discussions to trade this pick to the Grizzlies) This pick and the next fall into my don't look just at age. Remember the second best player in the NBA Finals. It was Pascal Siakam. He was 22 when he was drafted and selected 27th in the draft. How did 27 teams miss on him? He's too old. Can he develop a jump shot? Sometimes teams at this point need to look at what players can bring to the table and stop simply projecting into the future.

22. Celtics draft Grant Williams This fits right into my assertion from last year. Pick guys who can play basketball. People are going to say that he is undersized or doesn't have a stand out skill. I say this guy knows how to play basketball. You can't say that about several guys selected before him.

23. Jazz draft Darius Bazley (Jazz are currently in discussions to trade this pick to the Grizzlies, who will reportedly trade the pick to the Thunder) Thought his choice to join New Balance as an "intern" while getting 1,000,000 in deferred money was a great opportunity. It seems to have paid off for him getting selected in the first round and getting paid.

24. 76ers draft Ty Jerome >> traded to the Celtics, who are in discussions of trading the pick to the Suns Again right in my wheelhouse. This guy can absolutely hoop. He loves passing the ball and can play defense. He's a culture guy on a team that needs it. Love this pick.

44. Heat draft Bol Bol >> officially traded to the Nuggets Bol Bol's Suit is Terrible. Never drat a player with a big spider web on their suit unless you are actually drafting Spider-Man. Teams are at times beginning to weigh medical and mental red flags. Nothing is determined and this is a good spot for him to redshirt but it was tough to watch a potential top 5 talent sit in the green room until 44.

59. Raptors draft Dewan Hernandez I like this as my darkhorse pick this year. He was a former McDonald's All American then had some eligibility issues. He's big but mobile. I think Toronto did it again with this one.