Free Shipping On All Orders Over $100
Home » News » What If the One and Done Rule Existed 20 Years Ago?

What If the One and Done Rule Existed 20 Years Ago? 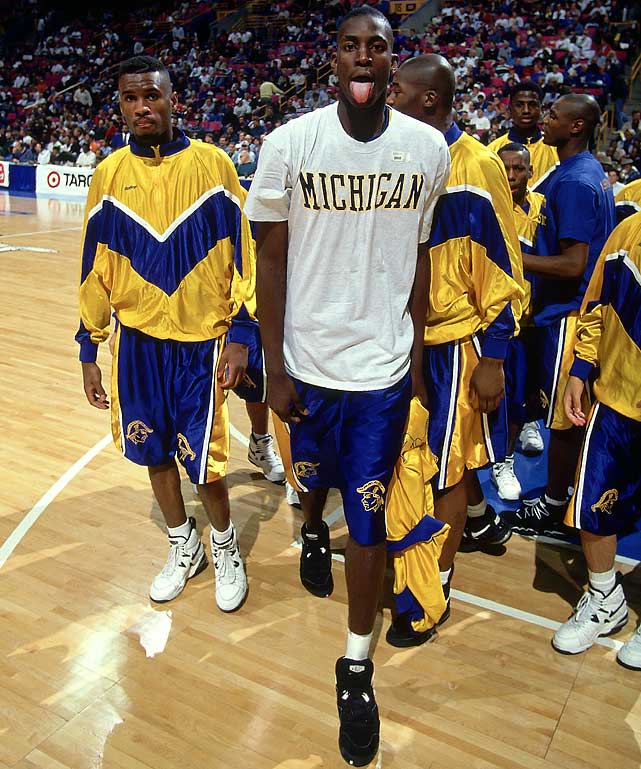 Let me start by saying I bent myself backwards, fell down a google, reddit, basketball blog hole looking into this question. Who would be the greatest college basketball team of all time, if players stayed for four years. Right away I ran into problems because some of the latter year Kentucky teams would be absolutely ridiculous.

For example, John Wall, Eric Bledsoe, Brandon Knight, Archie Goodwin, Terrence Jones, Michael Kidd-Gilchrist, Alex Poythress, DeMarcus Cousins, Enes Kanter, Anthony Davis, Nerlens Noel, Willie Cauley-Stein. Makes your eyes water just reading through the names. There is no chance though that all those recruits end up at the same school so we have to set some parameters.

There are a lot of straight to the pros players who hinted at where they would’ve gone and I believe it makes sense including them. Sure this seems to contradict by previous rule but whatever I’m the one writing this and I have to justify the last three hours on the internet with something. I’m also limiting my scope to the past 20 years just to simplify.

Wildcard: There is a world where the 1998-99 University of Kentucky team could’ve featured both McGrady and Nowitzki. An incredible pairing. Outside of the timeline though so I’m only giving them the wildcard slot

First up, I loved Kevin Durant in College if he would’ve stayed I’m giving him Augustin, Avery Bradley, Damion James, Pittman, Durant. Durant with anyone for 4 years would’ve been incredible. Let’s put it this way somehow Curry and Klay had the most open threes of anyone in the league last year. Coincidence? I think not they have the human magnet that is Durant opening up the floor for them.

I’m giving the 2005 North Carolina team that already won the championship JR Smith and Dwight Howard they would start along with Felton, McCants, May with Marvin Williams off the bench. The thought of Howard and Smith in college is hilarious. They would’ve won a championship and set records for number of wind sprints they made their teammates do for all of the dumb antics they’d be involved in.

This one is a bit of a yawn but I’m keeping the Gators together for another year. They were an all-time team even in the moment. The next year they would’ve had Calathes and Chandler Parsons to add to the mix.

My runner up is the 2011-12 Wildcats I’m letting them keep Brandon Knight to make their starting lineup Davis, Lamb, Kidd-Gilchrist, Jones, Knight and I’m making them all a couple years older. I would’ve loved to see a Davis vs. Oden match-up and watch college Kidd-Gilchrist match-up with LeBron. He lost his spark when he started getting injured and everyone realized he couldn’t shoot.

With all of that said for my money it would be Ohio State with LeBron James as a senior. I know most of the talent arrives as freshman when he’s a senior but he is such a transcendent talent that he would’ve absolutely dominated college basketball. His stat line from that NBA season is 27-7-6 and he led the following players to the NBA finals Larry Hughes, Zydrunas Ilgauskas, Drew Gooden and his samurai ponytail, Eric Snow, Donyell Marshall, Damon Jones, Boobie Gibson. This team is widely regarded, along with last year's Cavs, as the worst finals roster of the past 20 years. The common denominator LeBron was on both teams.

The recruiting class that year included Mike Conely, DeQuan Cook, and all time what if Greg Oden, round out the starting line-up with James and role player Ron Lewis and you have a beastly college team.

Two side bars on this:

1. In this hypothetical we would’ve watched college Lebron pre-torture Al Horford and Joakim Noah, two transcendent college talents who went on to excellent pro-careers. Both were routinely bounced by Lebron in the playoffs. They could’ve achieved Patrick Ewing levels of melancholy with a loss in the tournament to Lebron as well.

2. I have a direct link to this team as well but it is better told by my college roommate who did his student teaching at Conley and Oden’s High School.

I most vividly remember the one time playing at open gym in the Fall of 2002. Oden and Conley were both freshmen. Oden was only 14 years old, but was already 7'0" and his body was mountainous. I had seen a few teenage 7-footers while playing AAU basketball in high school, and they were gangly and uncoordinated. But Oden was very different. He was a 14-year-old in a grown man's body. I remember how odd it was as a 22-year-old man feeling like a young boy next to this 14-year-old!

I played a few games that day and watched as Oden dominated on offense and defense. He blocked shots, grabbed rebounds, and dunked often. It was easy to see what all the hype was about: he was the real deal. I had never seen or heard of a freshman this good.

If there is anything to gain from this exercise about basketball in the last 20 years it’s don’t bet against LeBron. He’s in his 16th year and still dominating the game at its highest level. I’m not a Lebron "Stan" but at some point there is just no denying the facts. If Lebron had stayed for 4 years in college and played with Oden and Conely that’s a wrap from my perspective.