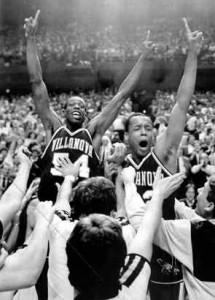 On March 30, 1985, the Villanova Wildcats survived Memphis 52-45 in the national semifinals to set up a rematch with Big East rival Georgetown for the national championship.

In fact, legendary St. John’s coach Lou Carnesecca compared the Hoyas, who handed the Redmen three of their season’s four losses, to great championship teams at Kentucky, UCLA, and Indiana.

“When a club executes as well as they do and plays at such a level of proficiency, there is really nothing you can do,” Carnesecca opined after his squad’s Final Four loss.

Eighth-seeded Villanova, who entered the NCAA Tournament with a 19-10 record that included a pair of losses to Georgetown – albeit by a combined nine points, seemed like little more than the Hoyas’ next victim, feline carnage en route to a second consecutive national title.

The oddsmakers installed the Hoyas an 8-point favorite. Only Kentucky in 1996 (vs. Syracuse) and Duke in 1999 (vs. UConn) were greater title-game favorites from 1985 to the present day, according to historical data from Boyd’s Bets.

” While calling Georgetown “probably one of the best teams ever assembled in the history of college basketball,” Villanova Coach Rollie Massimino was unphased, confident his team could shock the college basketball world much like NC State did in topping heavily favored Houston two years prior – and especially so without a shot clock forcing the Wildcats to shoot. (The 1985 championship game was the last one played without a shot clock.)

“Our strategy over the 29 years that I’ve coached has been that with three minutes or less to go, if we’re up one or more, we just use the expression, ‘We have enough,’” Massimino told reporters before the title game. “We try to instill in the kids the belief that they can beat people once they’re in that kind of situation.

” Villanova, of course, had a puncher’s chance – just like their fellow Philadelphia underdog, Rocky – given their team play, gritty style, and sturdy defense.

Even Georgetown Coach John Thompson reminded those who had anointed his Hoyas champions that Villanova wasn’t a chump. The Cats, after all, had pushed the Hoyas to overtime in an early-season meeting.

“I don’t expect to walk out on the floor and pick up a trophy,” Big John said.

Still, there was talk that Villanova would have to play a perfect game to beat the Hoyas, some of it from the Wildcats themselves.

“We weren’t afraid to lose,” Massimino said. “We were playing to win.” And win they did.