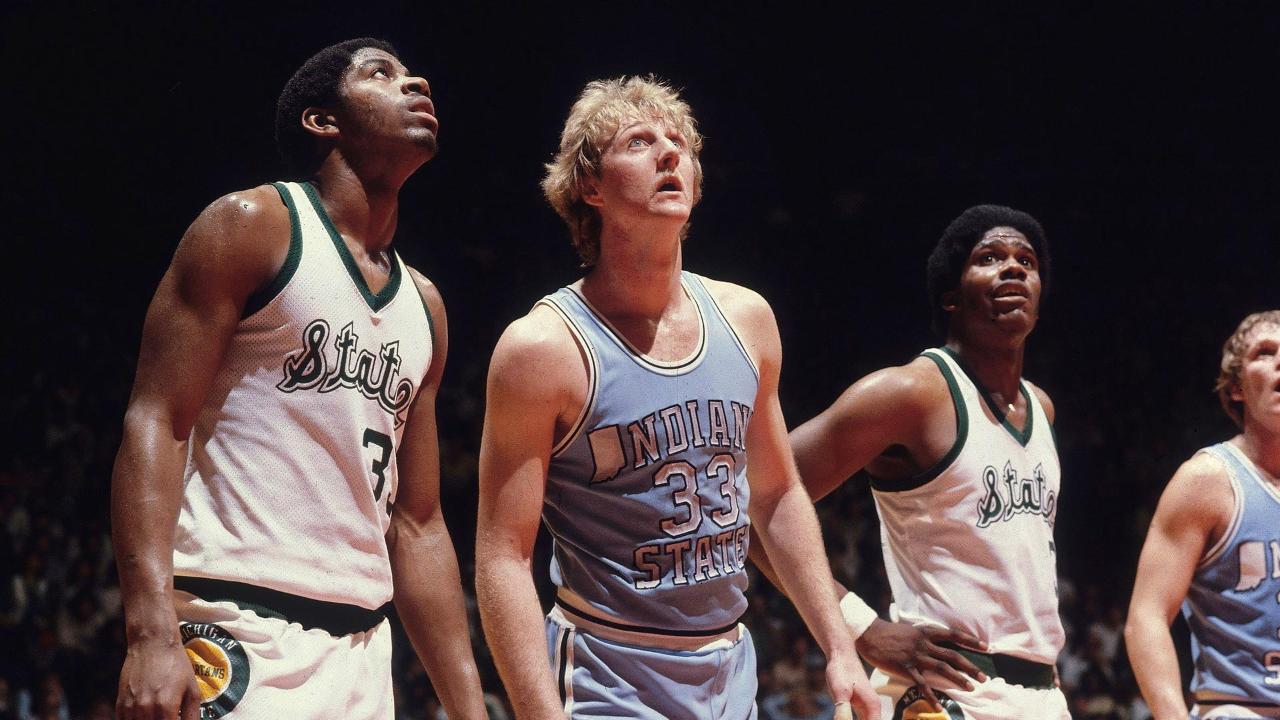 On March 26, 1979, Magic and Larry met for the first time and, as was so often the case when the two rivals encountered each other in subsequent years, everything was on the line when Magic’s Michigan State Spartans battled Bird’s Indiana State Sycamores for the 1979 NCAA title.

That Monday night in Salt Lake City, Michigan State topped Indiana State 75-64 in the most watched college basketball game of all time. The contest transformed the NCAA Tournament and launched the Bird-Magic rivalry that propelled the NBA in the 1980s.

The Chucker, High Volume Shooters’ resident historian, takes us back to the game that changed everything and shares some intriguing nuggets.

Bird played the entire NCAA Tournament with a broken left thumb. He had fractured in three places while attempting a steal against New Mexico State weeks before the championship game. And still, he led his Sycamores squad into the Final Four averaging 27 points and 13 rebounds as ISU dispatched Virginia Tech, Oklahoma, and Arkansas in tournament action.

The Final Four performances of Bird and Magic only intensified national interest in the championship tilt. In the Spartans’ 101-67 thrashing of Penn, Johnson notched a triple-double with 29 points, 10 boards, and 10 assists. Bird, meanwhile, tallied 35 points on 16-19 shooting to go along with 16 boards and 9 assists as the Sycamores edged a talented DePaul squad.

While the ISU-MSU battle was billed as Bird and Magic’s first-ever encounter, the two weren’t strangers. In fact, they had played alongside one another on the World Invitational Team that battled the Russians. Johnson even admitted to being a fan of Bird’s “because he does so many things well,” though Magic did note their stark differences: “I’m outgoing. I love people. I love conversation.”

In a pre-game press conference featuring some 200 reporters, Magic reveled in the attention.  “I’m eating it up,” Magic said. When it was Bird’s turn, however, he “fidgeted uncomfortably behind a microphone.” A reporter noted that Bird, who had largely avoided the press all season, seemed to be doing just fine and even having fun. “Wrong,” Bird responded.

After years of UCLA domination with scattered success from other programs, the ISU-MSU matchup was a welcome departure featuring two captivating figures in Bird and Magic. “You only had a short period to build up the final game, but it seemed like everyone in the world had already written a comparison [between Bird and Magic],” MSU coach Jud Heathcote said.
In comparing Magic and Bird, Chicago Tribunescribe Bill Jauss noted: “The 6-8 Spartan and the 6-9 Sycamore are 180 degrees apart in every department but one – brilliant basketball ability.” True.

While the Spartans were guided by Heathcote, the previous season’s Big Ten Coach of the Year, the Sycamores had a rookie coach in Bill Hodges. An ISU assistant, Hodges replaced Bob King who had fallen ill before the start of the season. While the 35-year-old Hodges would guide the Sycamores to 33 consecutive wins in his debut season, his career would fall sharply thereafter. He’d coach four total seasons at ISU but resign after the 1982 season and a second consecutive 9-18 campaign. He’d return to the sidelines in 1986 coaching NAIA Georgia College before spending six years at Mercer.

In preparation for the title game, Heathcote placed Magic with the Spartans’ reserves in practice to impersonate Bird and his passing genius for the Spartans regulars. “A few of our reserves may get bloody noses from Earvin’s passes, but I want us used to seeing those passes against us,” Heathcote said.

Indiana State headed into the championship game as the nation’s #1 team, sporting an unblemished 33-0 record. MSU, meanwhile, entered the Tourney with a 21-6 regular season record. At one point, though, the Spartans sat at 4-4 in Big Ten play and had lost by 18 points to last-place Northwestern, hardly the stuff of champions.

For as much hoopla as surrounds the 1979 title game, it wasn’t the prettiest of affairs. MSU and ISU missed a combined 51 shots and shot 60 percent from the line, while the game also included 26 turnovers and 43 fouls.

The Spartans’ 2-3 matchup zone, which included shading a second defender toward Bird, limited the French Lick sharpshooters’ open looks. Entering the game averaging nearly 29 points per game on 53 percent shooting, Bird went 7 of 21 from the field and finished with 19 points. He also had 6 turnovers. “I didn’t have a good game. I didn’t shoot the ball well. I didn’t have a lot of good looks. They defended me very well. They had guys surrounding me at all times. Still, that’s no excuse,” said Bird, who did manage to corral 13 boards and tally 5 steals.
Immediately following the loss, Bird’s legendary competitiveness appeared. “I’d like to play Michigan State again,” Bird said after the game. Years later, Bird would acknowledge the Spartans’ power. “We could have played them 10 times and they probably would have beaten us eight,” he would admit.