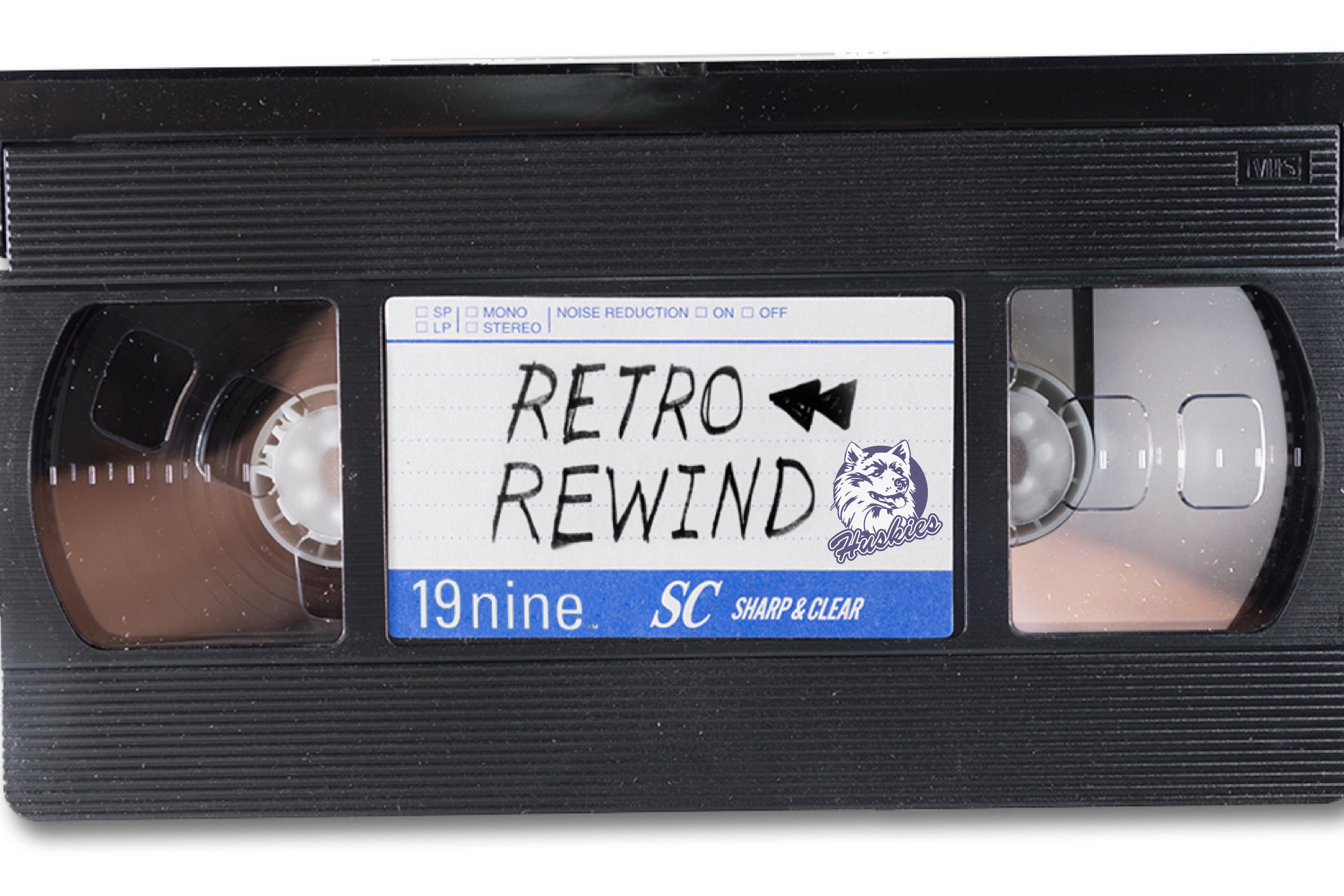 This season like so many before and since starting with a tournament in an exotic locale. The NBA should really steal this idea. It doesn't have to be on an Air Craft Carrier but why not have the NBA season tip in a small gym in Hawaii or in this case as a break in the action before conference play in The Great Alaskan Shootout. I remember Indiana and Brian Evans getting wiped off the floor by this team. They seemed to be from two different basketball universes. That Hoosiers squad won The Big Ten that year as well.

That team was excellent all year finishing 17-1 in the conference and 32-3 overall. Though Allen was the true star of the team they had plenty of other players that made their games fun to watch even when Allen was off the court. Travis Knight would go on to a pro career in the NBA and several other players from that team had lengthy pro careers outside the United States. This team also began Jim Calhoun's assent to the coaching pantheon that would see numerous Big East Championships as well as three national titles. Just a memorable time in college basketball and an incredible team to watch. 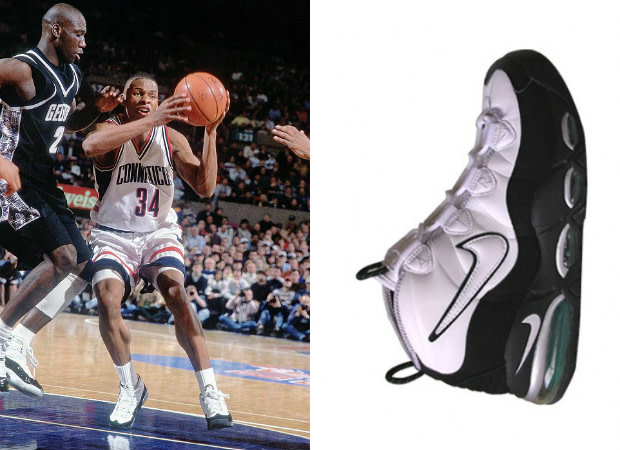 These are still grail shoes for me. They are iconic and though many will remember them on Pippen. I remember noticing this version first on UConn. Another sidebar: Ray Allen's calf muscles were out of control. I remember at the time being inspired to purchase strength shoes and complete approximately 10,000 calf raises that somehow only managed to lower my vertical by giving me tendonitis. 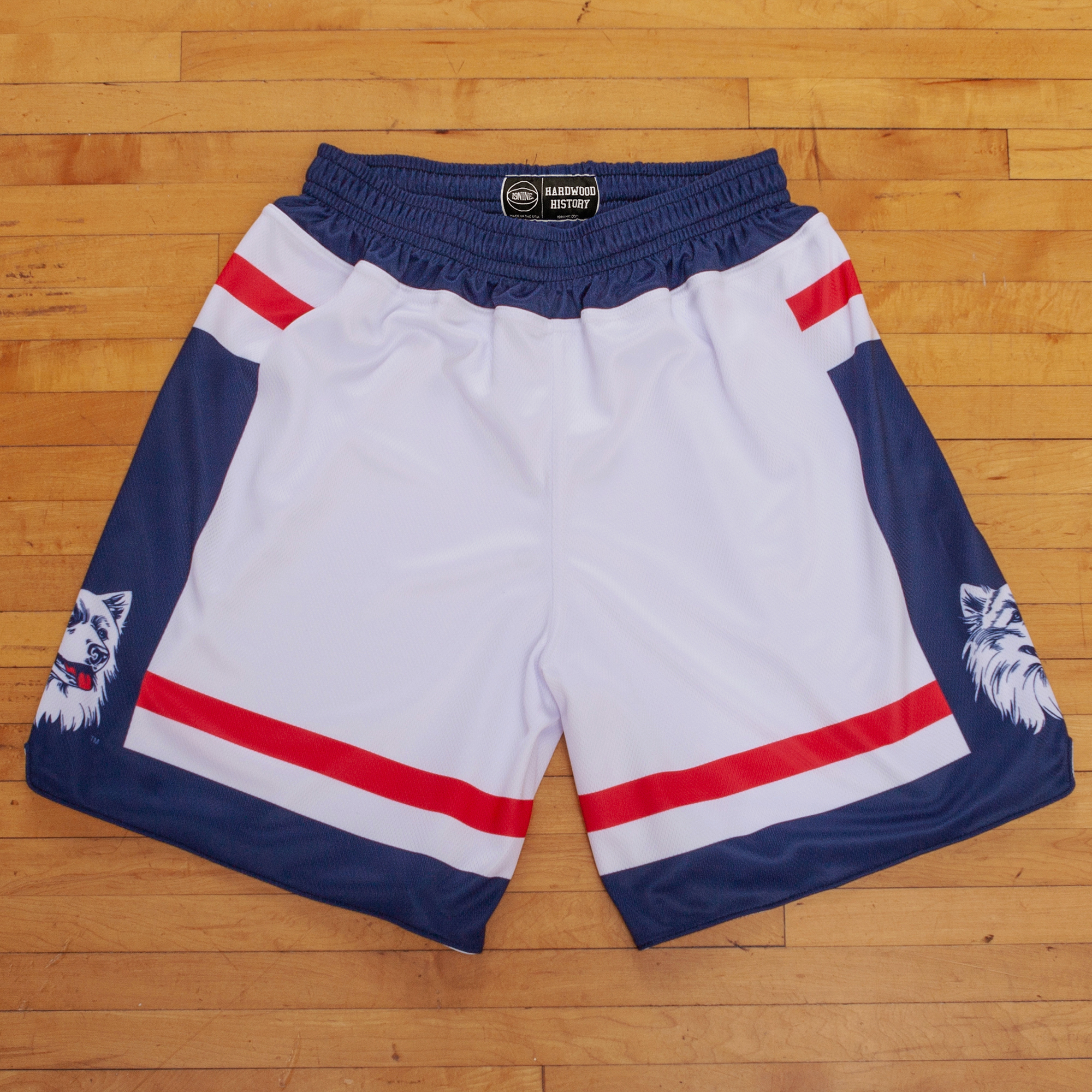 At first glance there's not too much going on with these shorts. I think that's the point. The color blocking along with the symetrical logo keep the focus on a few things done well. This is the chef plating of college basketball uniforms. You need design elements but you don't keep the lines simple unique and make the colors stand out from one another. It helps to have a superstar player and a great team wearing them too.

The look on Iverson's face after this ends is almost as iconic as Ray's shot. The motion on his shot all twisting and cycling just enough to get it on the rim. Got to love the show of emotion from Jim Calhoun. I think this cemented him as one of a new class of great coaches in the NCAA at the time.

12/6/1995 - The game was forgettable as far as the final score but I left the arena that day with a new favorite college basketball player. I can still remember watching transfixed as Ray Allen streaked down the court with incredible speed and a smoothness to his game that seemed entirely out of place in a college basketball game. It may seem overly simplistic and overused but he seemed like Jordan out there. I never got to see Jordan play in college but I can imagine that the dynamism that I got to see in the NBA was equally as impressive on the collegiate level. There is a reason he so impressed Bobby Knight just coming out of college. I have no doubt that had Ray been playing for Knight in Olympic trials he would've been impressed. That season's stats lined up 23.4, 6.5, 3.3 47% from three. That is not a typo he shot 47% from three. He almost founded the 50-50-80 club. Bill Simmons would be proud to list how few players have every come close to something like that. His highlights from that season are no less enjoyable to this day.