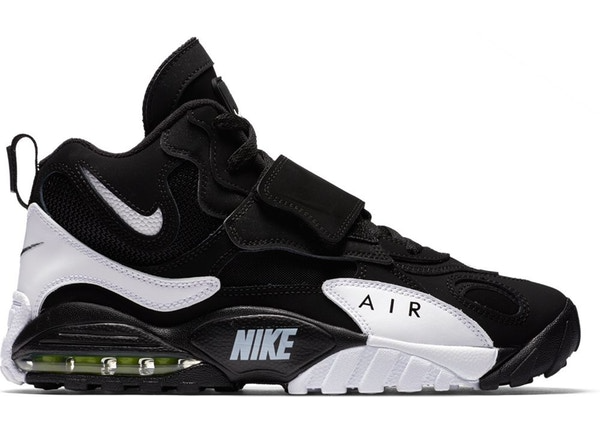 For years, Syracuse was a football school. Known for backfields built off the great Jim Brown and feared fullbacks like Larry Csonka, the Orange had the pigskin sport down pat. Even years later when becoming a basketball school, Syracuse's gridiron roots ran deep.

This proved true in the mid 1990s. While Jim Boehim was coaching the hoops squad to national prominence, the football program was producing top talent like Marvin Harrison, Quadry Ismail and Dwight Freeny. During the 1995-96 school year, the worlds would collide on the hardwood.

On the bench of Boheim’s Big East roster, future Pro Bowler Donovan McNabb traded in his deep ball for a jump shot as a reserve guard for the Orange. Up front, All-American John Wallace would lead his squad from the low post with the same toughness as an offensive tackle in the trenches. Different sports, same energy, the dynamic forward would do so in the Nike Air Max Speed Turf - a football shoe best known by wear of Dan Marino but repurposed by Wallace in the paint.

In the Speed Turf, Wallace would average an astronomical 22 points and eight boards a game in his senior season. This would hit home with fans as Wallace passed up leaving as a lottery land in the previous summer’s NBA Draft. In his fourth year, Wallace would battle the likes of Ray Allen and Allen Iverson for best in the Big East, ending Syracuse’s regular season as #15 in the country and entering the Big Dance as #4 seed in the West.

After rolling through the first two rounds, Syracuse had a showdown with Georgia in the Sweet 16. Sounds like a good football game, right? Well, the man in the Speed Turfs controlled the line of scrimmage, throwing an overtime forcing assist, finishing on a crunch time lob and ultimately hitting a game-winning shot to cap off a 30-point performance that would send Syracuse to the Elite 8 for a faceoff against Paul Pierce and the Kansas Jayhawks.

After quieting The Truth, the force in the football shoes would stomp on the competition all throughout the Final 4. Silencing all SEC chants by going head up with a Kentucky roster that featured five first round draft picks, Wallace would lose in the championship game but still lead all draftees to be with a game-high 29 points.

While Wallace may have done all that at a football school in football shoes, he most certainly had on basketball shorts. Now a Nike school from top to bottom, the Swoosh outfitted the Orange with new jerseys and a new logo that would soon become signature. Sporing an elongated S stretched around an orange basketball, Syracuse was shedding its gridiron image while defining a new one.

From 1995 on, Syracuse would be known as a basketball school. All it took was a senior standout decleating the competition.