Free Shipping On All Orders Over $100
Home » News » Tales from the Bench: Butler 2000 Lewis Curry 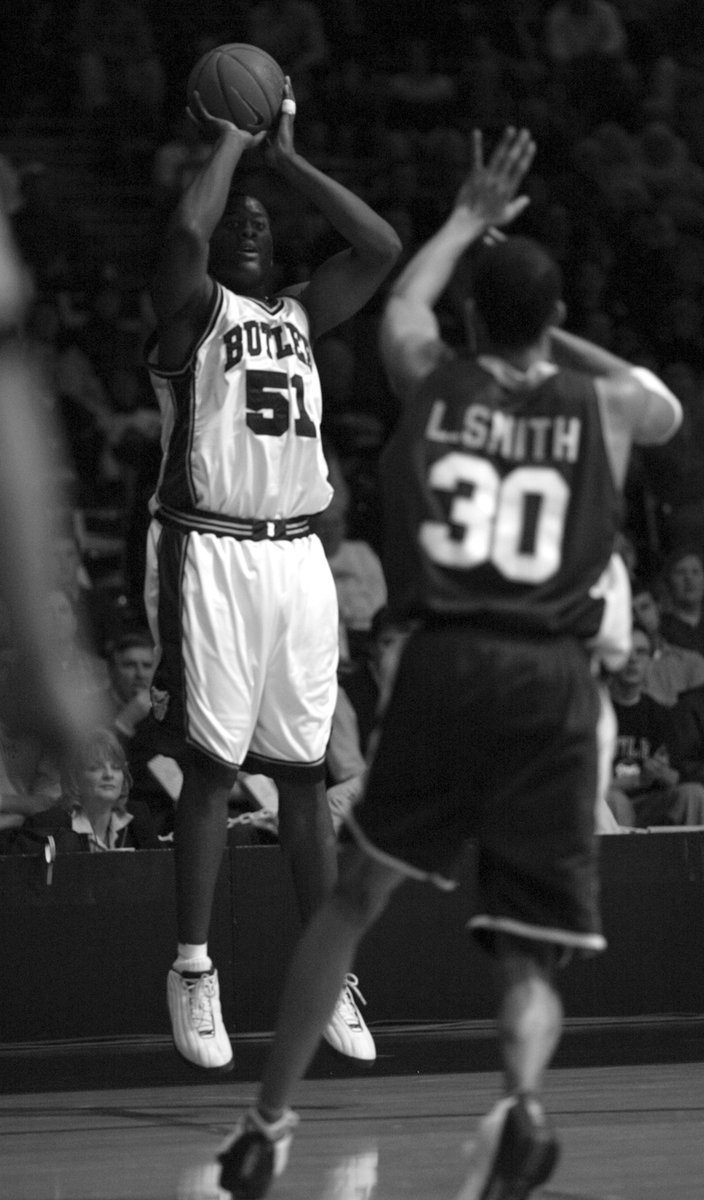 As a redshirt freshman at Butler during the 1999-2000 season, Lewis Curry and his teammates suffered a devastating first-round NCAA Tournament loss to Florida. Painful as that defeat was, it solidified The Butler Way and fueled the program’s rise into national prominence during the first decade of the 21st century.

Curry connects with The Chucker, High-Volume Shooters’ resident historian, to discuss Butler’s foundation-building 1999-2000 season and how one loss propelled so many wins.

A burly 6-7 forward from Fort Wayne, Indiana, Curry attracted the attention of Power 5 programs, but spurned those offers for Butler, where then-assistant coach Thad Matta led his recruitment.  “I enjoyed being in a smaller environment, but, above all, I felt like there was something special happening at Butler.”

Though a mid-major conference, the Midwestern Collegiate Conference (MCC), which would later morph into the Horizon League, boasted its share of big-time talent that Butler had to contend with. In particular, Curry points to a Detroit Mercy squad led by Willie Green. “I remember Green going baseline and dunking over our entire team. We looked at each other like, ‘That’s a pro.’” Indeed, he was. Green played 12 NBA seasons.

During Curry’s first year on campus, the 1998-1999 campaign, Butler went 22-10 and finished second in the MCC. Often a one-bid league, that earned the Bulldogs a spot in the NIT and extra motivation to win the conference tournament in 2000. “The goal heading into the 1999-2000 season was to win the conference tournament and that automatic bid. If not, it was almost certainly off to the NIT again.”

Halfway through the 1999-2000 season, though, even the NIT seemed like a longshot. Following a 10-point loss at Detroit Mercy on January 15, 2000, the Bulldogs sunk to a middling 8-7. “That brought the dreaded team meeting that can set a team on fire – either in a good way or a bad way.”

For Butler, the off-campus team meeting ignited an intense commitment to hard-nosed defense and execution. Butler won its next three games at Hinkle Fieldhouse and finished the regular season on a 12-game winning streak. With a 12-2 conference mark, the Bulldogs entered the MCC Tournament in Chicago as the top seed. They knocked off Loyola-Chicago in the quarterfinals before topping Wisconsin-Milwaukee in the semis. In a championship game rematch against Detroit Mercy, the Bulldogs thrashed the Titans 62-43. “We were in. Now, we just had to cross our fingers and hope for a solid seed.”

Butler earned a #12 seed in the East region and a date with a Florida squad led by future NBA stalwarts Mike Miller and Udonis Haslem. “We really didn’t know what to expect, but we had a great staff that had us prepared.”

While Florida held a 31-29 lead at the half, Butler felt good about where things stood. “We had matched their physicality. Defense was our calling card and we were making it hard for them.”

With 15 seconds left in regulation and Butler leading 60-58, Haslem drained two free throws to tie the game. Butler came back down the court with a chance to win, but leading scorer LaVall Jordan missed a jumper from the right wing. In overtime, Butler again held a late lead – a 68-67 advantage – with 8.1 seconds left and Jordan, an 83 percent shooter, heading to the line for two free throws. He missed both. “That was tough because LaVall had lost his great-aunt, the woman who raised him, right before the game. He was emotional and we were all pulling for him.” Jordan, now the Bulldogs coach, would later call that collection of March days the “worst week of [his] life.” 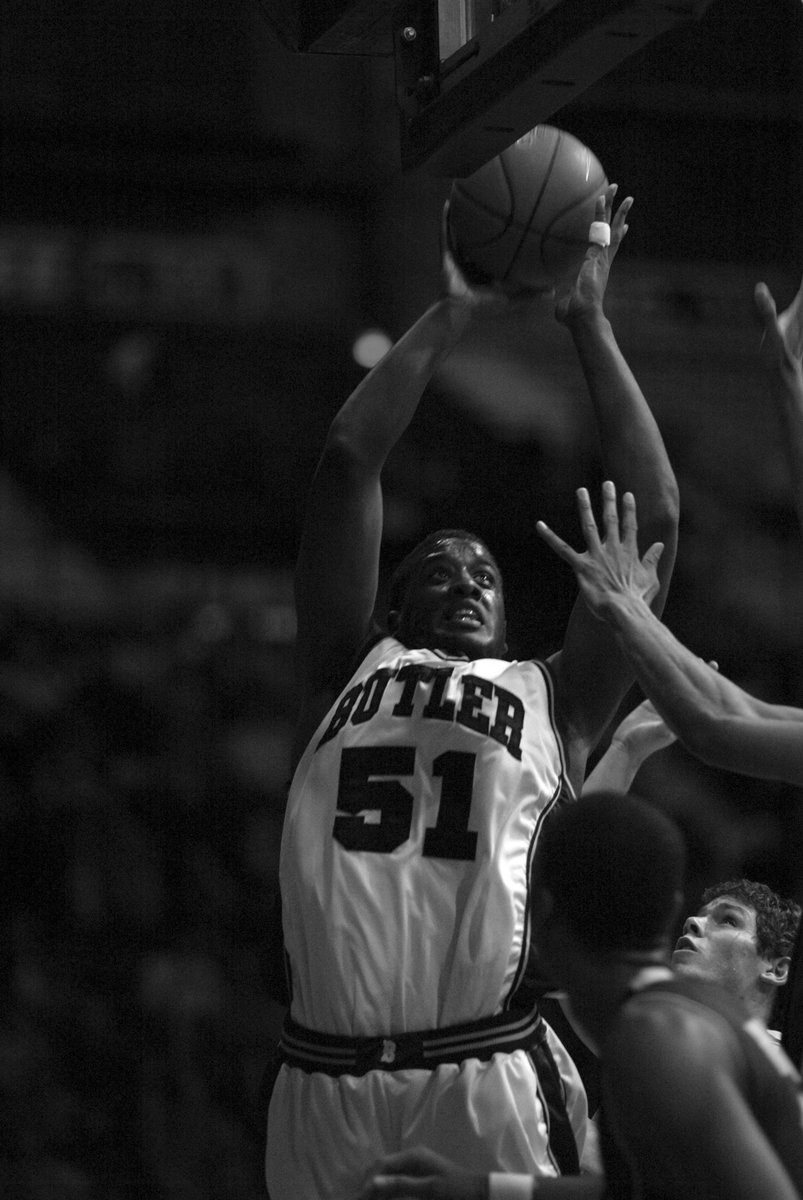 Florida pushed the ball up the court and with 2.5 seconds left, the ball found Miller’s hands on the left wing. He dribbled right and rushed into a crowded lane, letting a 10-foot floater go as he stumbled to the ground. Even today, Curry can see Miller’s desperate one-handed runner, the ball narrowly escaping the outstretched hand of Butler’s Scott Robisch before falling through the net. “I can’t believe he hit that shot. That shot.”

After the game, Curry recalls a “deflated” locker room. “There were tears because we were close. Too close.”

Curry says the foundation of the Butler program was solidified that day as he and his teammates left Winston-Salem and returned to Indianapolis. “That ignited a fire in us. That pushed us into the summer. A guy like me, a redshirt freshman who only averaged a few minutes a game, I developed and got stronger because I knew my time was going to come.”

Curry would play three more years at Butler and start all 33 games as a fifth-year senior in 2002-2003. In that three-year run, Curry and the Bulldogs won three regular-season league titles and made two NCAA Tournaments, including a Sweet Sixteen run in 2003 that featured victories over Mississippi State and Louisville. “The building blocks of the program were all there to build upon. I trace a lot of that back to that Florida game. We got a lot of wins out of that loss. It was a real turning point in the program’s history.”

As he moved into his upperclassmen years, Curry and his veteran teammates took it upon themselves to educate incoming players on The Butler Way – Humility, Passion, Unity, Servanthood, and Thankfulness. “You set out to do your best and that’s what we did. We left the program better than we found it.”

Seven years after graduation, Curry, who now co-owns an Indiana-based management company that represents athletes and entertainers, landed a ticket to the NCAA title game in Indianapolis. There, the Cinderella Bulldogs – then still a mid-major Horizon League team – battled Duke for the national title. “You combine The Butler Way with two pros like Gordon Hayward and Shelvin Mack and you’ve got a shot. And when Hayward let that half-court shot go just before the buzzer, it felt like it was going in.”

Though Butler has graduated from the Horizon League to the Big East, Curry believes the program’s underdog fight, so on display in that 2000 Florida game, remains. “Let other people say, ‘That’s just Butler.’ We know who we are.” 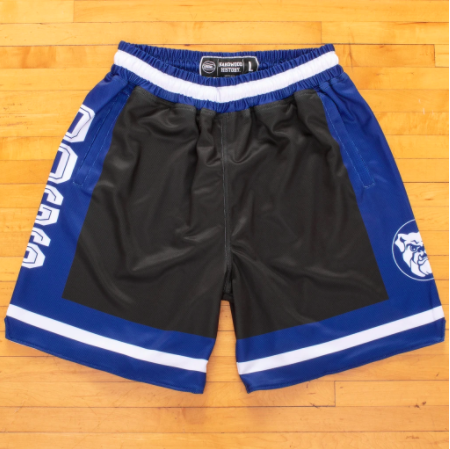