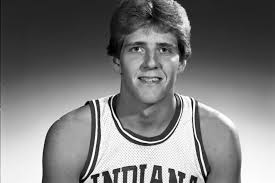 Without hesitation, Jeff Oliphant begins recounting one of the most iconic shots in NCAA Tournament history: Keith Smart’s baseline jumper that gave Indiana a 74-73 victory over Syracuse in the 1987 National Championship game. In this edition of “Tales from the Bench,” Oliphant, a redshirt sophomore on that title team, spends some time with The Chucker, High-Volume Shooters’ resident historian, to reminisce about IU’s memorable run to the 1987 title, “The Shot,” and his five-year run as an Indiana basketball player under Hall of Fame Coach Bobby Knight.

As a senior at L&M High in Lyons, Indiana, Oliphant and his Braves teammates were featured in a Sports Illustrated story highlighting the hysteria of high school hoops in the Hoosier state. Despite an enrollment of 132 students, L&M – coached by Oliphant’s father – was Indiana’s top-ranked team, propelled by a pair of big-time college prospects in Oliphant and Tony Patterson, who would start his collegiate career at Purdue before transferring to SMU. Though Oliphant visited Michigan State, Wisconsin, and Stanford, everything changed when Knight’s assistant phoned his home in 1984 and asked Oliphant if he wanted to visit the Bloomington campus. “Once that happened, that was it for me.”

Oliphant, who grew up 45 minutes from Bloomington as a Hoosiers fan, recalls a rather simple, no-fuss meeting with Knight. “He talked and I listened. Then, he looked at me and said, ‘Do you want to play here or not?’ which I think is what he asked everyone. My answer was yes. For me, Indiana was choice number one and then there was everything else.” Oliphant later learned that the scholarship he landed was once allegedly earmarked for late Chicago prep legend – and EPSN 30 for 30 subject – Benji Wilson. “If Coach Knight doesn’t call, I’m likely at Wisconsin.”

As a freshman during the 1985-86 season, the campaign John Feinstein chronicled in his best-selling A Season on the Brink, Oliphant redshirted. He defended star guard Steve Alford in practice and adapted to the rigors Big 10 basketball. “It was completely eye opening coming into a big-time program like Indiana. During pre-season conditioning, you’d run, play, and then lift. The first couple times, it’s exhausting and you wonder how you’ll ever keep pace.”

Despite a stunning first-round loss to Cleveland State in the 1986 NCAA Tournament, the Hoosiers entered the 1986-87 season #3 in the nation. While Alford and Daryl Thomas were the headline returnees, IU also added Keith Smart and Dean Garrett from the junior-college ranks. “Coach Knight didn’t recruit a lot of juco guys, but those two made a big difference. From the start, you could tell we were going to have a strong team, but I honestly had no sense of what it took to be a national championship team.”

The Hoosiers delivered on the lofty pre-season expectations, winning 14 of their first 15 and 23 of their first 25. “With Coach Knight, you go into every game expecting to win, even though you know you’re getting every team’s best shot. When we went into other gyms, we knew every team wanted to beat IU and Coach Knight.”

On Feb. 16, 1987, the Hoosiers ventured to Madison for a battle with Wisconsin and pulled out an 86-85 triple-overtime victory over the always-game Badgers. “I remember getting back to my place in Bloomington in the early morning hours and ESPN was just starting the game. My roommate Todd Meier and I threw some steaks in the oven and began watching the game about 4:00 a.m.”

Oliphant calls Thomas, a senior forward, the heart of the ’87 Hoosiers squad and trainer Tim Garl its unsung hero. “When Dean showed up, Daryl was able to go slot back down to power forward after a year of battling centers at an undersized 6-7. Daryl was so effective and incredibly important.” As for Garl, Oliphant says, he “worked around the clock to get people back on the court.”

Though the Hoosiers dropped two of their final three games – road contests at Purdue and Illinois – Oliphant remembers a confident bunch heading into March Madness. After a slow start to the season, Smart had begun to turn it on – “He got there from juco and had to get himself acclimated fast. How he went from October to March is just incredible.” – while Coach Knight’s strategic wizardry had the Hoosiers prepared to battle anyone. “Our defense was designed to take away what a team did best, and that always gave us a shot.” 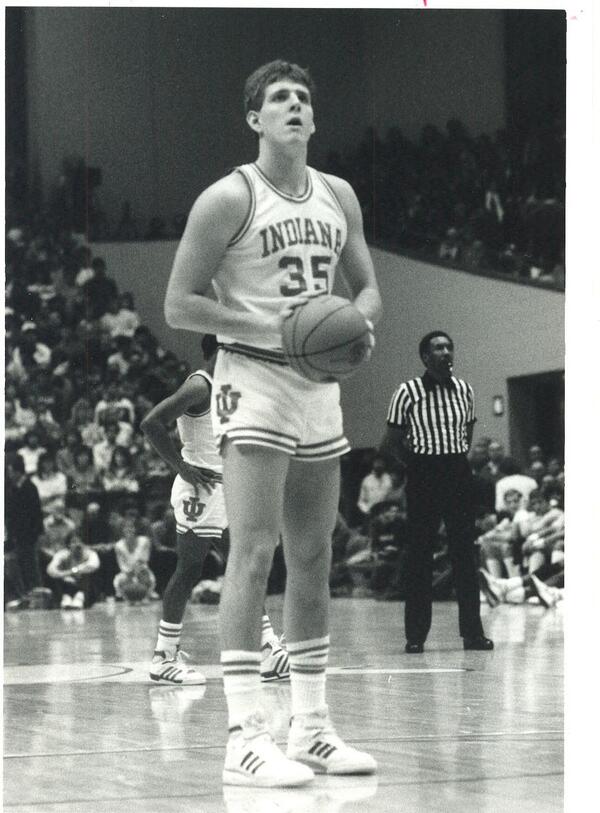 As the Midwest region’s top seed, the Hoosiers stayed close to home and played the opening two rounds in Indianapolis. After downing Fairfield and Auburn, IU held on to beat Duke – a squad headed by Knight protegee Mike Krzyzewski – to set up a meeting with LSU. Trailing LSU late in the second half, Oliphant worried the Hoosiers’ end might run in the Elite Eight. “But then Coach Knight takes control of the huddle and lays out the plan. With Coach Knight, he’ll figure out a way to win. Then, it’s on the guys to execute.” IU pulled out a 77-76 victory on a Ricky Calloway putback in the closing seconds.

In the Final Four against a high-powered UNLV squad, Oliphant recalls a lot of talk about IU being unable to hang with the Runnin’ Rebels’ fast-paced attack. “People thought we wouldn’t or couldn’t play their tempo, but we didn’t slow it down one bit. We went after them.” The Hoosiers raced out to a 53-47 halftime lead and overcame a tourney record 10 three-pointers from UNLV guard Freddie Banks (38 points) to hang on for a 97-93 victory.

Heading into the title game against a Syracuse squad featuring three NBA stalwarts in Sherman Douglas, Rony Seikaly, and Derrick Coleman, the Hoosiers’ confidence didn’t waver. “We had prepared all season for that moment. We went in feeling like we were going to win.”

The Hoosiers and Orange engaged in an epic battle on March 30 in New Orleans. With 28 seconds remaining, Coleman went to the line with Syracuse winning 73-72. After Coleman missed both of his free throws, Indiana trekked down the floor with a chance to win. Smart passed to Thomas in the short corner, who turned on Coleman before sending a short return pass to Smart. Oliphant gazed a few feet ahead as Smart gathered the pass, took one power dribble to the left, and rose for a baseline jumper with 6 second left. “I’m directly behind Keith and I’ve got a great line on the ball going through the basket. It’s a perfect shot and we got the win.” (Syracuse walk-on Joey Kohm has a different take on Smart’s jumper. Read about it on High-Volume Shooters or listen to the 19nine podcast’s interview with Kohm.)

Following the 1986-87 season, Oliphant spent three more seasons with the Hoosiers. As a senior co-captain during the 1989-90 campaign, he played that season through a torn ACL. In 52 minutes of game action, Oliphant scored 33 points (12 of 19 from the field). “I held off on surgery. I just couldn’t pass up the opportunity to play that fifth year.”

While Oliphant was getting taped for practice late in his final season, Knight stuck his head in the training room and asked Oliphant if he had any interest in sticking around in a coaching capacity. “But that wasn’t for me. Still, Coach Knight was someone who pulled out his rolodex and helped create a network for you.” Oliphant is now an attorney in Indianapolis.

Reflecting on his five years at IU, Oliphant considers himself “lucky.” “I moved to Bloomington at 17 and have teammates running across a decade. There were great times and hard times. After the good wins, Coach Knight is a fun guy to be around. When it’s not going well, it’s tough, but that’s the way it should be.” 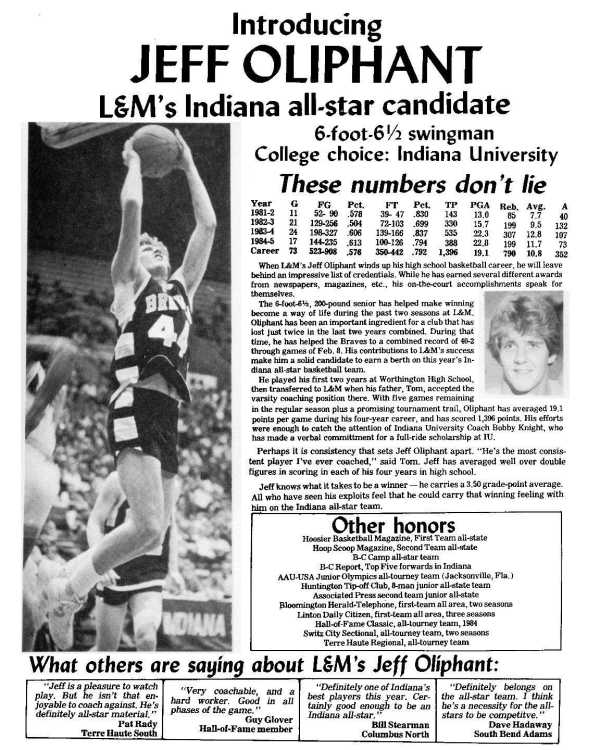