Tales from the Bench: Villanova 1985 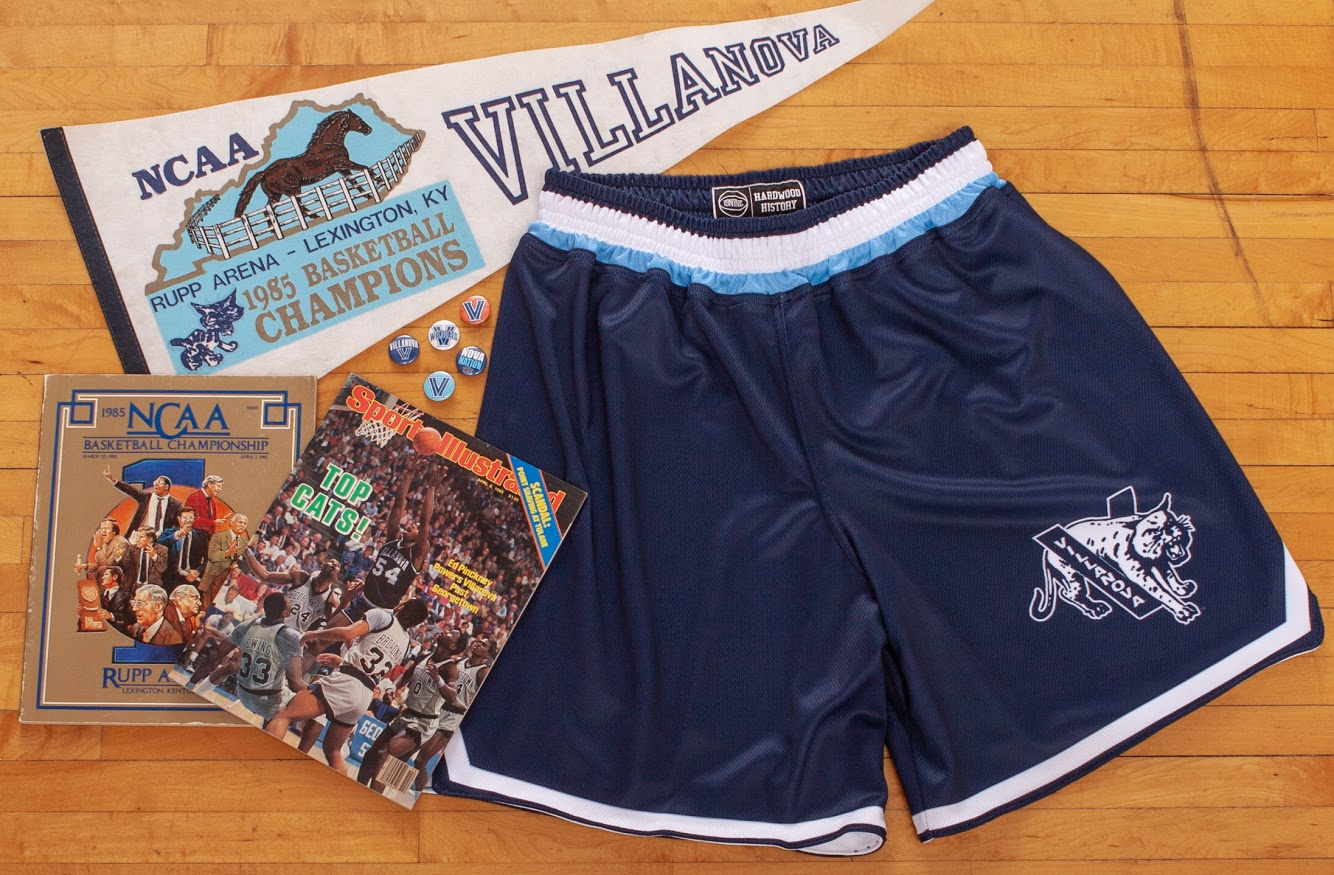 A four-year member of the Villanova Wildcats basketball program, Brian Harrington was part of two Elite Eight squads and one of college basketball’s most memorable teams: the 1985 Villanova  group that downed heavily favored Georgetown 66-64 to win the 1985 national title.

In this installment of “Tales from the Bench,” the 6-0 walk-on guard sits with High-Volume Shooters’ resident historian The Chucker to reflect on a collegiate career that culminated with the ultimate prize.

A Yonkers, NY, native who developed his game at New York City’s famed Rucker Park and had a brother who played ball at William & Mary, Harrington was recruited by some DIII schools before deciding to attend prep school in Massachusetts. There, his coach encouraged him to try out for the team at Villanova. “If I had any strengths, they were defense and a high threshold for pain. Any loose ball was mine.”

Upon arriving at Villanova, Harrington walked into the basketball office and met assistant coach Martin Marbach, who laid out the team’s pre-season schedule. Running at 6:00 a.m. on Monday, Wednesday, and Friday then games in the afternoon. Sprints followed by games on Tuesday and Thursdays. “When I showed up on the first day, there must have been 100 guys. I kept showing up and got picked to play.”

Harrington captured a walk-on spot during tryouts. “And I had to try out and earn it the next three years, too.” In Harrington’s first two seasons, 1981-82 and 1982-83, the Wildcats made Elite Eight runs before running into buzz saws: eventual champion North Carolina in 1982 and Houston’s famed Phi Slama Jama squad in 1983.

In Harrington’s junior campaign, 1983-84, the Cats finished a respectable 19-12, but lost in the NCAA Tournament’s second round to Illinois. That defeat to end a decent, though unspectacular campaign softened external expectations of Nova heading into the 1984-85 season, which saw the Wildcats unranked in the first AP poll. “We were so senior laden, so we knew we’d be pretty good, but nobody thought we’d end up the season on top.”

A veteran group led by seniors Ed Pinckney, Dwayne McClain, and Gary McLain as well as junior forward Harold Pressley, Harrington called that Wildcats group a “close-knit bunch” that included singing performances at every pre-game meal. “And you better come loaded or you’d get booed.”

Villanova ended their non-conference slate 8-1 and topped #5 Syracuse to open their Big East  schedule. “We knew we could play with anyone if we played our brand of basketball, which was ball control and defense. We switched defenses 4-5 times in a single possession. And from 1-14, every single guy on that team was a competitor.”

But the golden age of Big East basketball – and perhaps the greatest single season in Big East history – humbled the Cats, who battled the likes of sharpshooting Chris Mullin at St. John’s , the dynamic Pearl Washington at Syracuse, and low-post force Patrick Ewing at Georgetown. Nova finished fourth in the conference with a 9-7 mark. “The league was filled with talented players and inner-city guys who weren’t intimidated by anything and knew how to play the game at every position. The Big East was physical, tough, and every game was a battle.”

Villanova closed out the regular season with a nationally televised game against Pitt – and it wasn’t pretty. “Coach went off at halftime. He told the starters they had two minutes to show him something in the second half. Thirty seconds in, he pulled them all and me and a bunch of others bench guys got to play.” Pitt buried Villanova by 23. “That was the turning point. We knew we weren’t that bad. As seniors, we looked at each other and said, ‘This is not how it’s going to end.’”

The Wildcats rebounded by beating Pitt 69-61 in the Big East Tournament quarterfinals. “Then, we ran into our kryptonite: Chris Mullin and St. John’s. They had our number. We didn’t match up against St. John’s at all.” St. John’s downed the Wildcats 89-74, their third victory over Villanova that season.

That St. John’s loss put Villanova at 19-10 and squarely on the 1985 NCAA Tournament bubble. “We were on pins and needs hoping for an at-large seed.” That season, the tournament expanded from 48 to 64 teams and the Wildcats climbed in as a #8 seed. “But if it’s not 64 teams, I don’t know if we get in.”

Looking at the Southeast bracket and their trek forward, Harrington and his teammates saw a murder’s row of potential opponents. A solid Dayton  squad in Dayton. Big Ten champion Michigan. Maryland and Len Bias. “We felt like we were playing with house money since we were in, but we also knew Coach was going to have us prepared. He was a master at developing game plans and getting us to focus on one game at a time.”

Villanova escaped Dayton 51-49 in the first round before topping Michigan 59-55 to reach the Sweet Sixteen. There, the Wildcats clawed past Maryland 46-43, holding the uber-talented Bias to 4-13 shooting. “There was never a time in the first three games where I thought our season was going to end. We never panicked.”

With a trip to the Final Four on the line, Villanova faced a North Carolina squad headlined by Brad Daugherty and Kenny Smith. The Cats played a sluggish first half and went into the locker room down 22-17. “We went in thinking Coach was going to blast us.”

Instead, Massimino delivered a speech now etched in Villanova basketball lore. He looked around at his team. “You know what I want right now? A big plate of pasta with clam sauce. That would be better than watching you do this. It’s not you. What are you guys doing? Just go play. Forget about the noise.” Harrington says Massimino never talked X’s and O’s during that halftime gathering. “He only asked us to be us.”

Villanova outscored the Tar Heels 39-22 in the second half, securing a 56-44 win and the third Final Four trip in program history. “Coach was emotional, but never out of control. We knew he was fighting for us. He would yell and scream at us, but in the same breath he’d have his arm around us.”

The Final Four featured three Big East squads, as St. John’s battled Georgetown on one side of the bracket with Villanova facing Memphis on the other. “We knew Memphis was talented, but they didn’t play the gauntlet we had. We went into that game confident and we played super disciplined.” The Wildcats downed Memphis 52-45 to complete their unexpected run to the title game. That elicited this famous line from Memphis coach Dana Kirk: “If they’re a Cinderella team, then Cinderella wears boots.”

Despite losing twice to the Hoyas during the regular season, Harrington says he and his Villanova teammates wanted the Hoyas in the national championship game. Ewing & Co. obliged by pounding St. John’s 77-59 and pestering Mullin into as many turnovers – four – as field goals in a career-closing 8-point effort. “There was so much hype going into Georgetown-St. John’s game that we were perceived as a Cinderella, but we never looked at ourselves that way. We knew we could play and we knew we could beat Georgetown. There was no intimidation with them at all.”

Where did that confidence come from? “Ed Pickney had as good a career against Ewing as anyone. He loved the challenge of playing against Patrick. And our point guard, Gary McLain, was so confident and so controlled that he wasn’t going to let any pressure get to him.”

Massimino told reporters his Villanova squad would have to play the “perfect game” to beat Georgetown. That bold claim didn’t frighten his Wildcats squad. “If I could say it was loose for a championship game, it was. The sense was, ‘We’re here. Let’s do our job.’ We were so laser-focused on our offensive and defensive game plan.”

Harrington says there was no fire-and-brimstone speech from Massimino before taking the floor. “He always told us, ‘We got enough.’”

The first half was a back-and-forth affair. After holding the ball for nearly two minutes – this was the last NCAA Tournament game without a shot clock – Pressley scored on a put back to give Villanova a 29-28 lead with 4 seconds left in the opening frame. As the halftime horn sounded, Georgetown’s Reggie Williams clocked Wildcats backup center Chuck Everson. “Today, that’s a two-game suspension, but it was a no-call.”

Furious at the no-call, Massimino stormed off the court punching the air. Harrington trailed right behind him into the locker room. “And he went off in there. He looked like the Tasmanian Devil whirling around. ‘They’re not going to intimidate us. There’s 20 minutes left and we’re going to show them.’ The locker room blew up and we stormed that hill.”

Villanova rushed onto the floor, shot 9 of 10 in the second half, and never let the Hoyas assert their will. “We were fed up hearing all that nonsense about how great and physical Georgetown was. We became super laser focused on our assignments and the game plan.”

With 10 seconds left and the Wildcats up four, Harrington turned to teammate Steve Pinone and said, “We’re gonna win.” “But it wasn’t until that point because the game was so heated that you never knew what was going to happen.”

Villanova’s title-game victory over Georgetown remains among the most memorable upsets in college basketball, if not sports, history. The Wildcats shot 22 of 28 from the field, a 78.6 percent clip, and nailed 22 of their 27 free throws. “We got back to the hotel and there were thousands of people around. When we got back to Philadelphia, it was pure pandemonium.”

The victory closed the book on Harrington’s playing career, though he stayed with the program and Massimino another two years as a graduate assistant. “Coach was like a second father to me. He was a fighter who was always prepared and worked hard, but knew how to have a good time.”

After that stint on the Villanova staff, Harrington went into the sports and entertainment business before moving into the philanthropy world following the September 11 terrorist attacks. His Each One Counts Foundation supplements pain management therapies for terminally ill children. Massimino served on the nonprofit’s board of directors, bringing in additional star power with college basketball analyst Bill Raftery. Harrington’s old teammate Pinckney and current Villanova coach Jay Wright are members of the organization’s advisory group.

Thirty-five years later, Harrington reflects on that title game, his teammates, and, most of all, the late Massimino with immense fondness. “Coach made us a family and it survives to this day.” Everson and Harrington, in fact, used to take an annual trip down to Massimino’s Florida’s home. Other players from the 1985 squad soon joined in and the group blossomed to 12 attendees. “He loved having his guys back and we loved being there with him.”