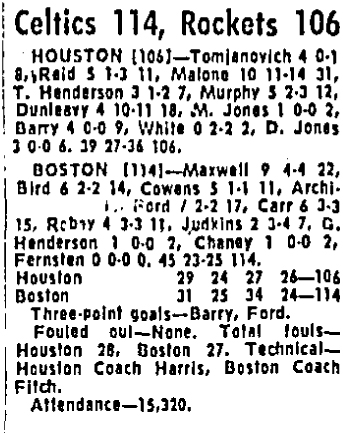 Larry Legend stuffs the stat sheet in his professional debut- a game that featured the first three-pointer in NBA history.

Coming off his College Player of the Year honors at Indiana State and signing the richest rookie contract in NBA history ($600,000 a year, according to media reports), Larry Bird’s professional debut on Oct. 12, 1979, came with immense anticipation.

Heck, someone in the Boston Garden crowd of 15,320 that Friday night even released a dove to celebrate Bird’s arrival. In typical Bird fashion, the sharpshooter said that he hoped someone would “kick that guy in the backside” for his dimwitted scheme.

Against a Houston Rockets team led by Moses Malone and future NBA head coaches Rudy Tomjanovich and Mike Dunleavy, Bird played 28 minutes, shooting 6 of 12 from the field and hitting his only two free throws. He paired his 14 points with 10 rebounds and 5 assists in the Celtics’ season-opening 114-106 win.

(In a sign of how different the NBA game was in 1979, the three-point line’s debut season in the NBA, Bird missed his lone attempt from behind the arc. Bird’s teammate, Chris Ford, hit the Celtics’ only other three-point attempt, which is widely recognized as the first trey in NBA regular-season history.)

Despite Bird’s solid all-around tally and the Celtics’ win, foul trouble plagued the rookie and Bird rode the bench for the game’s final 6 minutes with 5 fouls.

“I only fouled out of two college games in my career and now I’ve been in foul trouble in eight of nine games [counting exhibitions],” Bird said to reporters postgame. “I guess the refs just call them tight in the first couple of games. I’ll have to learn their system and play to it.

“But as the season goes on,” Bird continued, “I’ll be better.”

Bird, of course, delivered on that promise. He averaged 21.3 points, 10.4 rebounds, and 4.5 assists en route to Rookie of the Year honors and a 61-win season.

And as fate would have it, Bird wasn’t the only notable rookie debut that October night.

Among the nine-game NBA slate on October 12, the Lakers opened their season in San Diego – yes, Silicon Beach once had an NBA team. There, Magic Johnson recorded 26 points, 8 rebounds, and 4 assists in the Lakers’ 103-102 victory over the San Diego Clippers.

Yet another link in the Bird-Magic narrative.