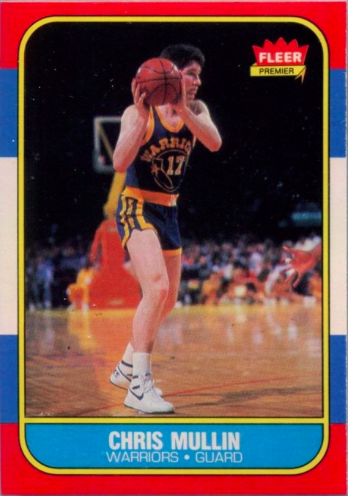 In this ongoing series, The Chucker, High Volume Shooters’ resident historian, digs into the professional debut of some of the game’s all-time greats. Today: Chris Mullin.

During his four-year career at St. John’s, Chris Mullin racked up the accolades and cemented his status as one of the game’s most promising young talents.

The lefty sharpshooter earned Big East Player of the Year honors three times – no small feat given the depth of talent in the Big East during the first half of the 1980s, played on the gold medal-winning 1984 U.S. Olympic team with luminaries like Michael Jordan and Patrick Ewing, and was honored the with 1985 Wooden Award as college basketball’s top player while leading Lou Carnesecca’s Redmen to the Final Four.

Leaving St. John’s as the school’s all-time leading scorer, Mullin was a sought-after target as the 1985 draft – the first employing the Draft Lottery – approached. Drawn to Mullin’s playmaking ability, Golden State selected him with the seventh pick.

The previous June, Fitzgerald loaned Golden State owner Franklin Mieuli $4 million so the Warriors could re-sign Joe Barry Carroll and Larry Smith. The loan apparently included language that allowed Fitzgerald veto powers over any long-term Warriors’ moves and also afforded him an option to purchase majority interest in the Warriors after the 1985-86 season. Fitzgerald, it’s worth noting, denied he ever meddled in the Mullin negotiations.

For his part, Mullin didn’t seem much concerned as the contract impasse lingered.

“I’m not sitting around biting my nails waiting for the phone to ring. My parents give me $10 a day lunch money. … The ball’s in Golden State’s court. I’m going to play in the NBA.”

Whatever the reason, it was nearly a month before Mullin finally inked his four-year, $2 million deal with Golden State, which began the season 1-5 without its ballyhooed rookie on the court.

Despite never practicing with his new teammates and not expected to play, Mullin gave an immediate jolt of energy to the Warriors when he laced ‘em up on Nov. 6, 1985, before a crowd of 5,506 in Oakland. In 24 minutes of action, the Brooklyn native scored 15 points on 6-9 shooting, including nailing a critical baseline jumper with 19 seconds left, as Golden State downed the SuperSonics 105-101.

“I’m just glad it’s over and glad I got my feet wet,” Mullin told reporters after the game. “I didn’t know the plays, and my game really hinges on outthinking the opposition and I really could not do that a lot because I was unacquainted with the offense.”

Though the Warriors captured only 30 wins during Mullin’s rookie season, they emerged as one of the NBA’s most exciting teams during the late 1980s and early 1990s as Mullin teamed with Mitch Richmond and Tim Hardaway to create the famed Run TMC trio under run-and-fun coach Don Nelson. During a five-season stretch from 1988-1993, Mullin averaged more than 25 points per game.

A member of the original U.S. Dream Team at the 1992 Olympic Games in Barcelona, Mullin played 12 seasons in Golden State before joining the Pacers for a three-year run (1997-2000). He returned to the Bay Area for his final season, playing 20 games during the 2000-2001 campaign.

A four-time All-NBA selection, Mullin averaged 18.2 points over 986 career games. He was inducted into the Naismith Memorial Basketball Hall of Fame in 2011.