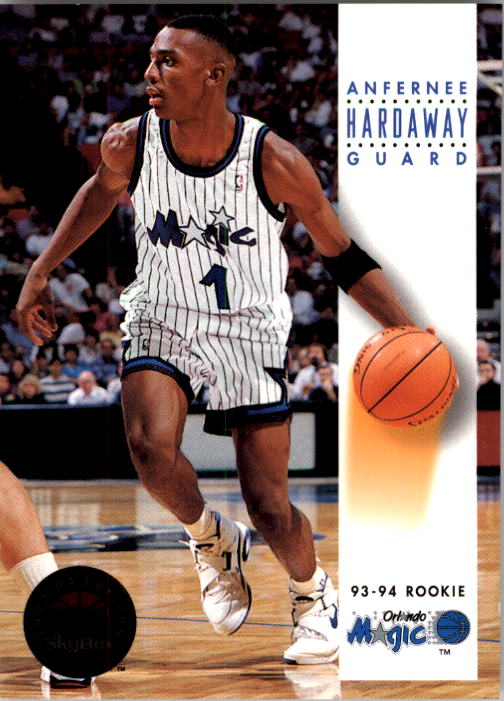 First Game: Penny Hardaway In this ongoing series, The Chucker, High Volume Shooters’ resident historian, digs into the professional debut of some of the game’s all-time greats. Today: Penny Hardaway.

After a standout career at Treadwell High in Memphis, Anfernee Hardaway continued his career with his hometown Memphis State Tigers. There, “Penny” earned national acclaim and drew comparisons to Magic Johnson before leaving Memphis after his junior season to enter the professional ranks.

At the 1993 NBA Draft, the Orlando Magic, who had won the draft lottery on a 65-1 odds, selected Chris Webber with the first overall section. After the 76ers tabbed 7-6 center Shawn Bradley with the second pick, Golden State grabbed the 6-7 Hardaway. But Penny wasn’t long for the Bay.

On draft night, Orlando traded Webber to Golden State for Hardaway and three future first-round picks. The move gave the Magic a dynamic 6-7 guard to pair with dominating young center Shaquille O’Neal. While Orlando fans weren’t so thrilled with deal – many of the 10,000 fans at the Orlando Arena on draft night booed the announced trade – others lauded the move, seeing Hardaway as a key ingredient to push the fledgling Magic into the playoffs, “I thought that was the best thing [the Magic] ever did,” San Antonio Spurs coach John Lucas opined after the Hardaway deal.

One NBA scribe added: “He’s got a name that sells, a game that sells, and an immense teammate who figures to make his stats among the best for a rookie since, oh, 1979 or so.” After inking a 13-year, $65 million deal on the eve of training camp, Hardaway joined his Magic teammates and learned three positions – point guard, shooting guard, and small forward – to help new Magic coach Brian Hill install his up-tempo style.

“He’s energized our team like no one I’ve ever seen,” Magic executive John Gabriel told reporters during the pre-season.

On November 5, 1993, Penny made his NBA debut in front of 15,200 fans at the Miami Arena against the Heat. Starting at the shooting guard position next to veteran point guard Scott Skiles, Hardaway nearly notched a triple double with 12 points, 8 rebounds, and 8 assists in 36 minutes of game action.

“I wasn’t nervous,” Hardaway said after his debut. “I’ve still got a lot to learn, but I feel like I’m ready to take on the challenge right now.”

More importantly, the Magic won 116-96 and the Shaq-Penny pairing looked as promising as the Magic franchise had hoped when they swung the draft-night deal. O’Neal was his dominating self with a 42-point, 12-rebound performance, while Hardaway displayed the poise and dynamic playmaking the Magic coveted.

Hardaway would go on to start all 82 games for the 1993-94 Magic en route to earning NBA All-Rookie Team honors. With averages of 16 points, 5.4 rebounds, and 6.6 assists per game, Penny helped the Magic win 50 games and claim the upstart franchise’s first-ever playoff appearance. Orlando would follow that up with a trip to the NBA Finals in Hardaway’s sophomore campaign (a 4-0 loss to Houston).

After playing in 241 of a possible 246 games during his first three seasons, injuries began to derail Penny’s career. In 1999, Orlando dealt Hardaway to the Phoenix Suns, where he spent 4.5 seasons before finishing his 14-season NBA career with the New York Knicks and Miami Heat.

In 2018, Hardaway returned to his collegiate stomping grounds as head coach of the Memphis Tigers.