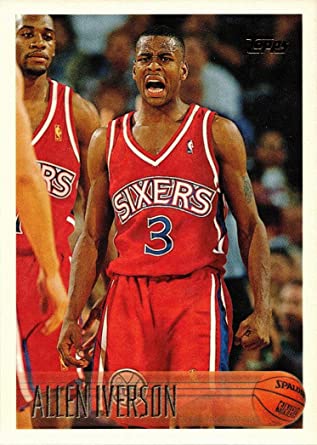 In this ongoing series, The Chucker, High-Volume Shooters’ resident historian, digs into the professional debut of some of the game’s all-time greats. Today: The Answer, Allen Iverson.

Make no mistake, there were a lot of questions about The Answer back in 1996. As Allen Iverson prepared to make his move into the NBA ranks following two seasons at Georgetown, NBA executives questioned his slight size and ability to endure the rigors of the 82-game NBA slate. There were lingering questions about his character, which included a five-year prison sentence following a bowling center brawl during his high school years in Hampton, Virginia. And after the Philadelphia 76ers selected Iverson with the first pick in the 1996 NBA Draft, many openly questioned Iverson’s ability to lead an NBA franchise, long the expectation of #1 picks.

In a draft that included the likes of Kobe Bryant, Steve Nash, and Ray Allen, the Sixers were convinced Iverson would be their Answer and made the 6-foot playmaker the first point guard selected first overall since Michigan State’s Magic Johnson in 1979.

“He was the most talented, most competitive player in college last season mentally and physically the toughest,” Sixers general manager Brad Greenberg said as Iverson prepared for his rookie season. “When you see him on the court, you see the excitement, the energy, the talent, the special talent. … There will be the ups and downs that all players go through, but he’s a great talent. He’ll play right away.”

On Nov. 1, 1996, Iverson set off to answer all the questions, to give answers and to become The Answer. That night, Iverson debuted in Philadelphia against the Milwaukee Bucks, which also served the regular-season debut of the Sixers’ new arena, the CoreStates Center (now known as the Wells Fargo Center).

Before a sellout crowd of 20,444, including more than 30 of Iverson’s family and friends from Virginia, Iverson displayed the tenacity, explosiveness, and temerity that would come to characterize his career. He made 12 of 19 shots, dished out 6 assists, and committed just three turnovers in 37 minutes of game action. His Sixers teammates marveled at his energy.

To be certain, Iverson also endured his struggles. His first NBA three-point attempt caught only air. With the Sixers clinging to a two-point lead late in the fourth quarter, Iverson committed an off-the-ball foul that gave the Bucks two free throws. He then got whistled for a technical foul, which gave the Bucks another free throw. He later chucked a long jumper and had another attempt swatted away by Vin Baker as the Bucks went on an 8-0 run to overtake the Sixers and claim a 111-103 victory. Iverson scored a game-high 30 points, took a game-high 19 shots, finished -15 in plus/minus, and was unquestionably the most dynamic player on the court.

“I want to take each game as a learning experience,” Iverson said post-game, acknowledging that his highs came with some lows. Still, the brash, flashy point guard remained confident he could hang in the NBA game. “No zone, no junk defenses. In the NBA, it’s just you and your man. I feel I can score on anybody.”

That bravado would define much of Iverson’s 14-year, Hall of Fame career. Fearless and daring, borderline reckless at times, Iverson enjoyed a decorated career that included 1997 Rookie of the Year honors, seven All-NBA nods, four scoring titles, 11 All-Star appearances, and 14 SLAM magazine covers as he came to represent the swirling blend of basketball and hip-hop street culture. (He also delivered perhaps the most memorable press conference in NBA history.) In 2001, the same year he led the Sixers to the NBA Finals, Iverson captured the NBA MVP Award.

After a nomadic end to his career that included stops in Denver, Detroit, Memphis, and Turkey, Iverson officially retired in 2013 and did so with the same counterculture mojo that defined his often-polarizing career, saying, “I don’t regret anything” as he exited the game.