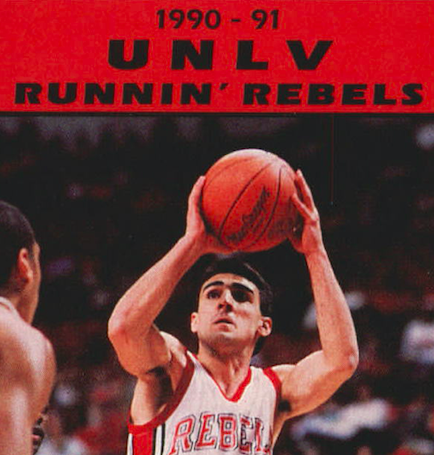 Among a team of giants, Bryan Emerzian was the unassuming walk-on at the end the UNLV’s bench throughout his four-year career at UNLV (1988-1992).

As a sophomore during the 1989-90 campaign, Emerzian was a beloved part of the Runnin’ Rebels squad that claimed the national title with a 103-73 thrashing of Duke. Though the Chicago native played all of 15 minutes that season, UNLV fans still awarded him their “People’s Choice” award – a bronzed gym shoe – to celebrate his status as a fan favorite.

In this edition of “Tales from the Bench,” The Chucker, High-Volume Shooters’ resident historian, connects with Emerzian to discuss that championship season, the Rebels’ efforts to repeat in 1990-1991, and memories of head coach Jerry Tarkanian, among the most colorful characters in college hoops’ history.

A solid, yet undersized ballplayer at Waukegan High north of Chicago, college recruiters weren’t beating down Emerzian’s door. So, Emerzian’s mother knocked on Tarkanian’s door. She called the coach and promoted her son, striking a particularly compelling chord by telling Tarkanian that the Emerzian family shared Tark’s Armenian roots. Later, on a spring break trip to Vegas, Emerzian and his father walked to campus hopeful they might chat with Tark. The coach welcomed Emerzian into his office and soon directed him to enroll. When a sportswriter later asked Tark if Emerzian was on the team simply because he was Armenian, clearly hinting at favoritism, the colorful coach deadpanned: “Why of course not! It’s because I’m Armenian.”

Throughout his time at UNLV, Emerzian says he and Tark often bonded over Armenian culture. “Anytime my mom came out to Las Vegas, she made a traditional Armenian dish and Tark would eat it up. He took to me and I was grateful for what he did allowing me to be a part of the program.”

As a freshman during the 1988-1989 season, Emerzian saw 26 minutes of game action for a Rebels squad that went 29-8 and lost in the Elite Eight to eventual runner-up Seton Hall. That set the table for the 1989-1990 season and a pre-season #1 ranking fueled by the arrival of juco stud and former Parade All-American Larry Johnson as well as returning stars Greg Anthony, Stacey Augmon, David Butler, and Anderson Hunt. “When we got Larry, it was on. Our goal was to win it all.”

Practices, Emerzian says, were intense affairs and Tark stressed hard-nosed defense. “We had a simple offense: get the rebound, get up the court, and get it into the post. On defense, we were going to smother you with close outs and boxouts and be very physical. And that’s what we practiced every day.” 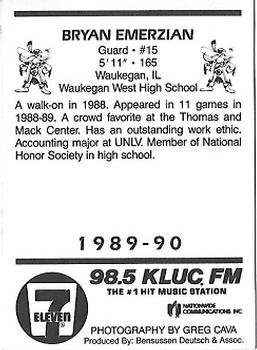 Despite the pre-season hype, UNLV struggled out of the gate, sitting at 3-2 after losing contests to Kansas and Oklahoma. Yet more, there were swirling rumors of NCAA sanctions and a Tarkanian retirement as well as the first-semester suspension of star center David Butler. “It seemed the NCAA was trying to suspend a player every game and Tark didn’t hesitate to play that us-against-the-world card with the way others kept coming at us.”

Eventually, the Rebels found their groove, successfully integrating Johnson into the mix and winning the Big West regular season and tournament crown with a 29-5 overall mark. “There was some disappointment early on, but once we got going, we were pretty much unstoppable.”

Reflecting on his teammates, Emerzian calls Augmon “a quiet assassin.” “He wasn’t highly recruited out of Pasadena, but he would outwork anyone. Hunt, meanwhile, was “flashy and funny,” while Brooklyn-bred Moses Scurry was the team comedian. “Moses was just a real special dude and, looking back, he was probably closer to Tark than any other guy in the program.”

Anthony, however, was the undisputed team leader. After spending his freshman year at the University of Portland, Anthony returned to Las Vegas to suit up for his hometown team. “He was an absolute freaky athlete, but, above all, a born leader. Greg commanded the attention of everyone. Tark never had to call timeouts with him on the court.”

One especially notable unsung hero on that UNLV roster: assistant coach Tim Grgurich, who has enjoyed a long career in the college and pro game as a player-development guru. “He was a guy who didn’t want any attention, but he was at practice every day working nonstop. All he wanted to do was work with players and make them better.”

Tark was the linchpin pulling it all together. “He’d go into inner cities to watch kids play on the streets. He knew how to relate to kids. He’d tell you he wasn’t the best Xs and Os guy, but that’s because he thought it was about the Eddies and the Joes. If you can do that as a coach, if you can connect with your players and get them to commit, then you’ve got a chance.”

Emerzian recalls Tark being uniquely superstitious. “I was the 13th man and so I didn’t suit up because he didn’t like the number 13. You couldn’t sit next to him on the bench. He wouldn’t even let us have ketchup at pre-game meal because he thought it slowed us down. We couldn’t even have it on the table.”

Earning the #1 seed in the NCAA Tournament’s West bracket, the Rebels pounded Arkansas-Little Rock and then dispatched Ohio State to reach the Sweet Sixteen. There, at Oakland’s Oracle Arena, UNLV escaped upset-minded Ball State 69-67. “It seems all championship teams have that one tournament game they scratch out. After we beat Ball State, we felt the championship was ours.”

After topping an inspired Loyola Marymount squad in the Elite Eight, the Rebels returned to Denver’s McNichols Arena, site of the previous season’s Elite Eight loss to Seton Hall. “We got to Denver days early and Tark had us doing suicides and wind sprints in practice. That staff trained us to be the most conditioned team in the country and we weren’t going to run out of gas there.”

The Rebels downed Georgia Tech in the Final Four to set up a championship matchup with Duke. After building a 12-point halftime lead, Tark’s crew didn’t relent and thrashed the Devils 103-73. UNLV is still the only squad to top 100 in a championship game, while their 30-point margin of victory also remains a title-game record. “It was surreal to be a part of something so great, so memorable.”

The national title brought soaring attention to UNLV, a mid-major school that had established its identity as a top-flight program with an energetic brand of basketball. “Coach went from not recruiting any of the top guys to having a revolving door of top recruits on campus after that. Honestly, it’s like they were recruiting us.”

Heading into the 1990-1991 season, Emerzian says the team fully expected to repeat. Johnson, Augmon, Anthony, and Hunt all returned and UNLV was the pre-season #1, a title they never relinquished. The Rebels entered the Big Dance 30-0 and the most exciting team in America. Their average margin of victory was 29 points. “We were like rock stars. I’d sign 50 autographs after a game and I didn’t even play.”

In the Final Four, UNLV squared off with Duke and Emerzian describes it as a “strange game.” The Rebels clung to a two-point lead at halftime and had trouble controlling Duke star Christian Laettner, who had 20 in the first half. Duke swarmed Johnson with extra defenders. Freshman Grant Hill gave Duke an athletic, skilled presence they didn’t have the previous year. “They had improved and we couldn’t pull away.”

Emerzian says the game turned with Anthony fouled out with 3:51 remaining. “The only way we were going to lose was if Greg Anthony fouled out. He got two tough calls and we just couldn’t replace that leadership.” Though UNLV led by five with 2:31 to play, Duke closed the gap and Laettner’s free throws with 15 seconds to play secured Duke’s 79-77 victory. “It was a shock to think we had lost, almost a sense of confusion of how that even happened. I sometimes wonder how things might have been different had we not beaten them by 30 the year before.”

Emerzian returned the following year for his senior campaign, even earning a starting nod. Despite losing three NBA lottery picks in Johnson, Augmon, and Anthony, the Rebels went 26-2. NCAA sanctions, however, prevented them from playing in March Madness. “That team could’ve done some special things.”

Tark left UNLV after the 1991-1992 season and Emerzian, now a teacher and coach in suburban Chicago, says he’s ever indebted to the coach who gave him a chance to be a part of something so special. “The kids I coach now, they know I played college ball and was in March Madness. They’ll ask to see the ring. But they really have no clue what that UNLV team represented. People remember that era of UNLV basketball.”