I’m a huge fan of the 19nine brand.  My closet is stuffed with retro shorts, with and without pockets (I’ll admit it – I was apprehensive at first, but I’ve fully embraced the pockets and I’m all in).  Most importantly, I feel a strong connection with the tradition and college basketball history the company promotes.

So when Josh and I connected in December, shortly after the publication of my new book, Phoenix Rising: A Playbook for Building a Mid-Major College Basketball Program, I jumped (in my 1994-95 Virginia shorts) at his offer to guest-write the Newsletter.

The topic, with no restrictions, was to highlight a handful of my favorite books about basketball.  Now, this isn’t a ‘best of’ list which I would’ve pondered for weeks on end, but it still took time to sift through some great reads over the years, and some classics (Playing for Keeps by David Halberstam, The Big O by Oscar Robertson, Dream Team by Jack McCallum, The Jordan Rules by Sam Smith to name a few) were tough to leave behind.

But in the end, I settled on four very different books covering four vastly different topics by four of my favorite authors, each of which have been particularly impactful to me as a reader and author.  And with Josh’s blessing, I also took the opportunity to spread the word about my own book with some of the best college basketball fans I know.

Phoenix Rising: A Playbook for Building a Mid-Major College Basketball Program, Aaron A. Mitchell (2021) If you like a great underdog story, if you enjoy learning about legends before they were legends, if you’re a junkie for sports facts and the stories behind the stories, or if you just like college basketball, then I’d humbly suggest this book is for you.

Phoenix Rising tells the story of the University of Wisconsin-Green Bay (UWGB) basketball team’s rise to national prominence in the late 1980’s and early 1990’s under the guidance of future Final Four coach Dick Bennett.

In 1985, Bennett took over a flailing Mid-Continent Conference club with no budget and a dwindling fan base.  He installed a set of core principles, improved the program’s recruiting and scheduling, and ultimately created the now-famous “Pack” defense as a way for his less talented teams to compete with the power conference schools.  With the help of Dick’s son (and future NBA player and National Championship coach) Tony Bennett, the UWGB Fighting Phoenix knocked off national powers DePaul and Purdue, and ultimately earned the school’s first NCAA trip in 1991.

Over the next five years, the Phoenix earned four more postseason bids (including three straight NCAA Tournaments) and pulled off a stunning tournament upset over Jason Kidd’s Cal Bears in his final college game.  Wins over major programs like NC State, Oregon, Colorado, Marquette, Texas A&M, and Butler demonstrated the success of Bennett’s system, and a trio of NBA players proved he could develop local talent.  Without question, if the Phoenix rise had taken place a decade later with every game was televised and highlights blasted 24/7, you’d know the story by heart.

I spent five years researching, interviewing, and writing this book and enjoyed every moment of it.  What became clear as I outlined the Phoenix history were the underlying themes that seemed universal in building a successful program – things like getting player buy-in, team building, the importance of an intimidating home venue, and importance of recruiting well in-state.  These themes became the foundation for the book, which uses the ascension of UWGB as a template for mid-major success.

Along the way, I was fortunate enough to have a few great conversations with the great Gene Keady, who contributed a Foreword focused on his many interactions with the Bennett family.  Similarly, former Butler coach and creator of the Butler Way, Barry Collier, provided the “Legacy” (or Afterword) section of the book, where he credited Dick Bennett with influencing the principles Collier would later instill at Butler.

This is one of the most comprehensive books on any mid-major program you’ll find, and certainly the most detailed on Tony Bennett’s college career and the great Dick Bennett’s early coaching career.  Like a bold mid-major evaluating a raw recruit, I hope you’ll give this book a chance – you’ve got nothing to lose. 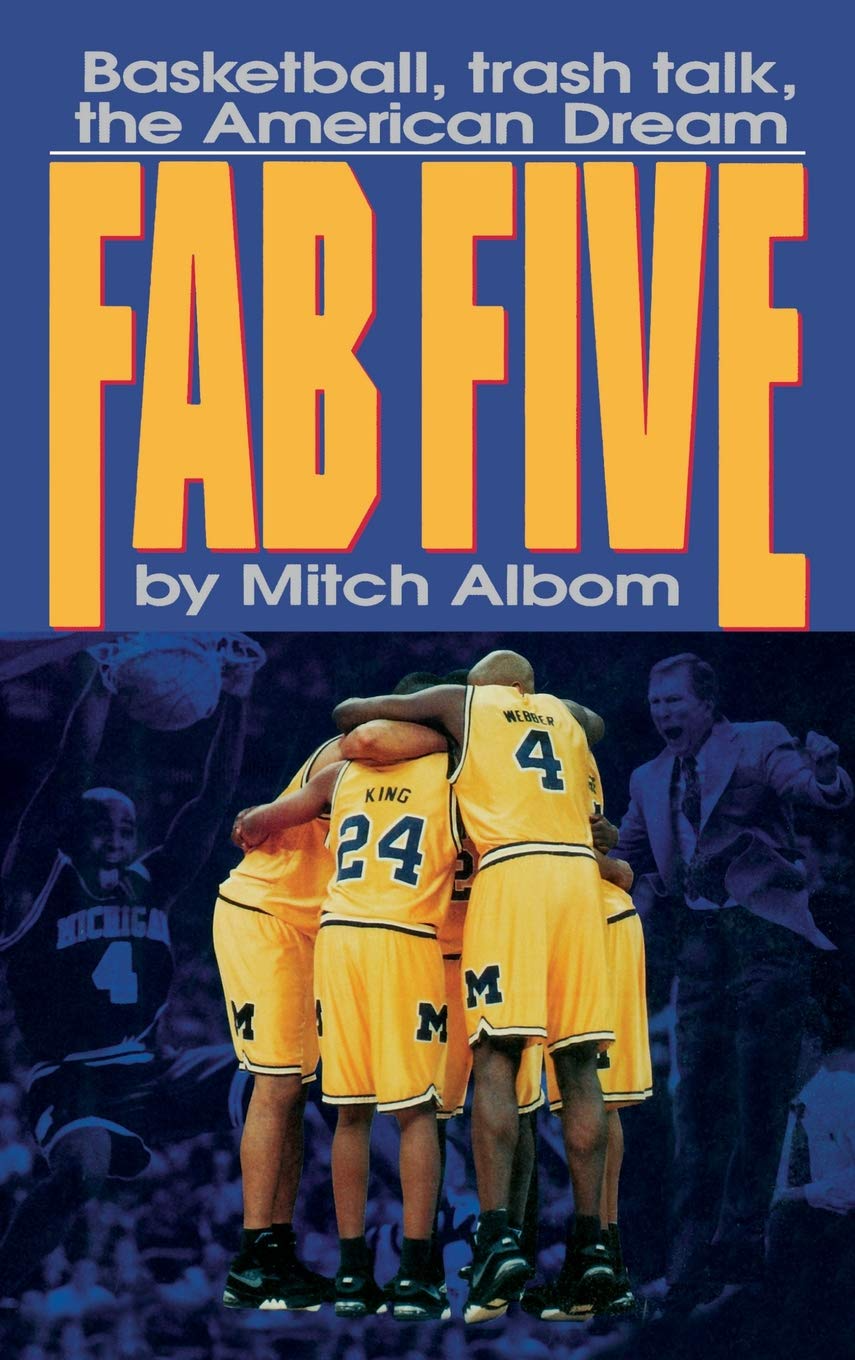 Fab Five was the first basketball book I ever fell in love with.  Packed to the rafters with insider details and nasty trash-talk, author Mitch Albom’s Fab Five brings the reader into the homes and on the court with the sport’s most famous quintet, starting with high school recruiting and continuing straight through to C-Webb’s NBA draft.

The spectacle of five freshman in baggy shorts (got both of my 19nine pairs in my closet!) emerging from the locker room for the first time in 1991, all while their elder teammates were stuck with “European bathing suits?” The anticipation when Steve Fisher caved and finally started all five together against Notre Dame in February of their freshman year?  The sense of accomplishment when Michigan upset Ohio State, with Jalen and C-Webb giving it to Jimmy Jackson, in the Elite Eight in 1992?

The pain of losing in epic fashion in the 1993 NCAA Championship, and the sorrow of it all coming to an end?

Fab Five peels back the curtain on all of these and, quite literally, everything – all the tension, girls, cursing, and triumph – in between.

It matters little now, but I’ve always been most impressed with the timing of this book.  Somehow, author Mitch Albom was able to research, interview, write, and publish this monstrous chronological narrative at the exact pinnacle of the Fab Five’s audacious college basketball takeover.  Published in 1993, the book offers all the rawness of the era without suffering from revisionist hindsight.

Maybe it’s the team, or my youthful obsession with sports, or Albom’s gifted writing.  Probably it was a little of each.  But whatever the reason, this book remains one of my favorite basketball reads. 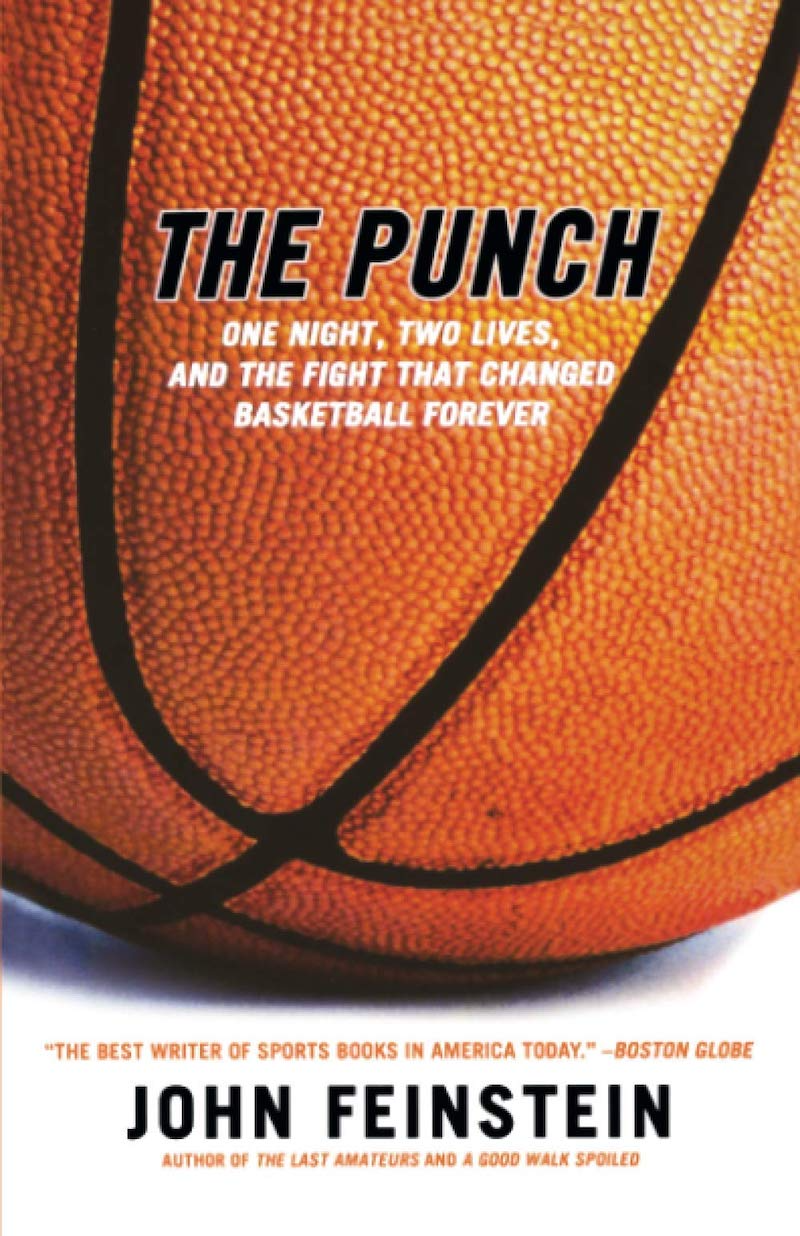 In my mind, John Feinstein is sports-writing royalty.  His books on golf (think A Good Walk Spoiled, Tales from Q School, or the highly-educational The Majors) should be mandatory reading for every sports fan.  And his entries in the college basketball arena (think A Season on the Brink, A March to Madness, and The Last Amateurs) are nothing short of spectacular.

And yet, The Punch – an in-depth review of one of the NBA’s darkest moments – might just be my favorite of Feinstein’s efforts.

For those that grew up during the Bird and Magic era or later, the NBA of the 1970’s would be completely unrecognizable.  Clubs played in front of half-full arenas and switched cities faster than a family of four would trade station-wagons.  NBA playoffs, and even Finals, games were often shown on a tape delay.  Tape delay!  Imagine waiting four hours in today’s world to see Giannis knock out the Suns.  On top of that, the game itself was so physical that fist-fights were not only common but expected.

Against that backdrop, Feinstein tells the story of the most famous fight in NBA history.  In a December 1977 match-up between the Kareem-led LA Lakers and the up-and-coming Houston Rockets, one of the NBA’s then-routine dust-ups turned ugly, and nearly fatal, when Kermit Washington dropped Rudy Tomjanovich with an unexpected haymaker near center court.

Like a thorough detective, The Punch reviews the tragedy from every conceivable angle, leaving no stone unturned as it offers the whole truth and nothing but the truth.  I picked up this book with limited knowledge of the era or event, and put it down feeling equal parts wiser and ashamed at my past ignorance. 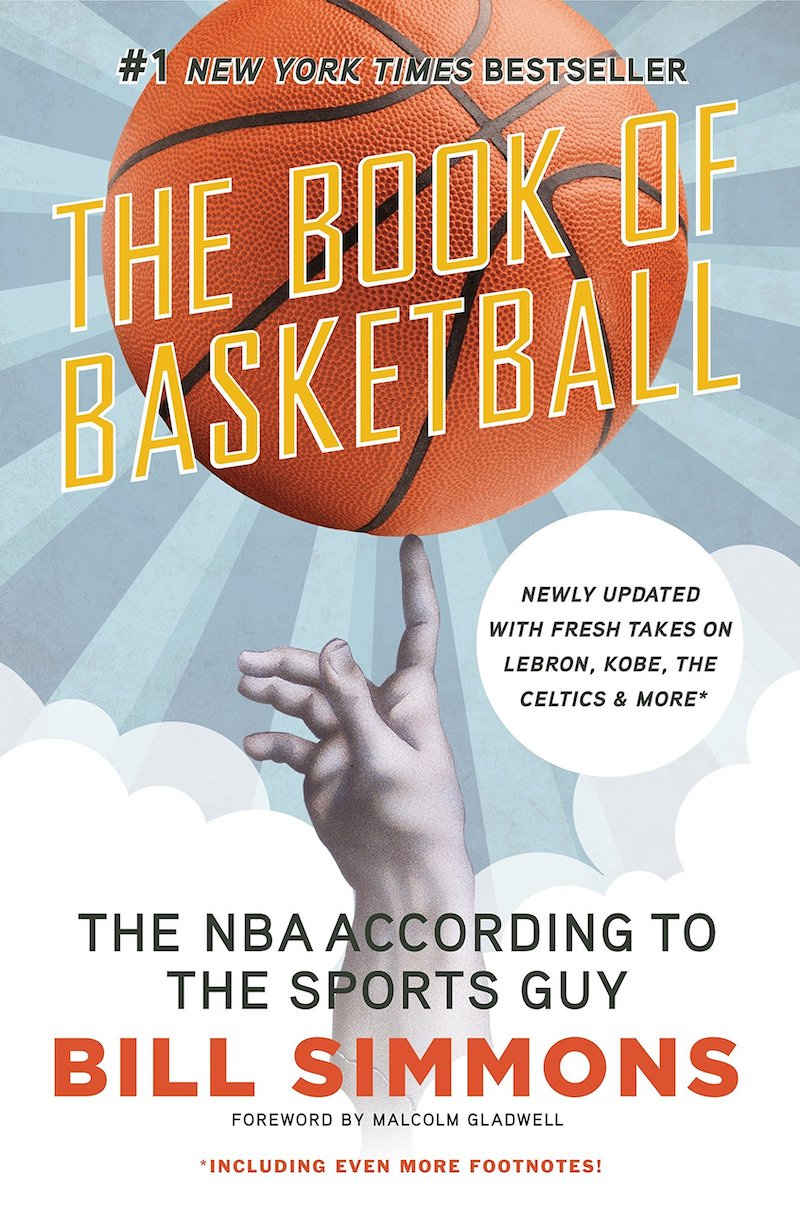 Reading Bill Simmons has been a ritual of mine since the early 2000’s when I would impatiently hit ‘refresh’ on ESPN.com, waiting for his latest article to drop.  Simmons’ Page 2 entries got me through college, and writings like “The Holy Trilogy of the Karate Kid” are, in my mind’s eye, pure works of art.

Simmons is like the Seinfeld of sports fandom.  He writes things that you read, laugh, shake your head, and convince yourself you certainly would have come up with yourself if given enough time (though most of the time you wouldn’t).

My personal favorite entry is “The What-If Game” chapter, which hits on many of the exact debates I’ve engaged in with friends for years, but does so infinitely more articulately than we ever have.

That chapter, as with the entire book, grabs you with its sheer volume of information and holds you with impeccably persuasive writing.  And that’s really the charm of Simmons – his work is so enjoyable because it makes you feel you’re sitting at the bar next to him, trading stories and making arguments on the latest great sports debate.  And what would be better than that? 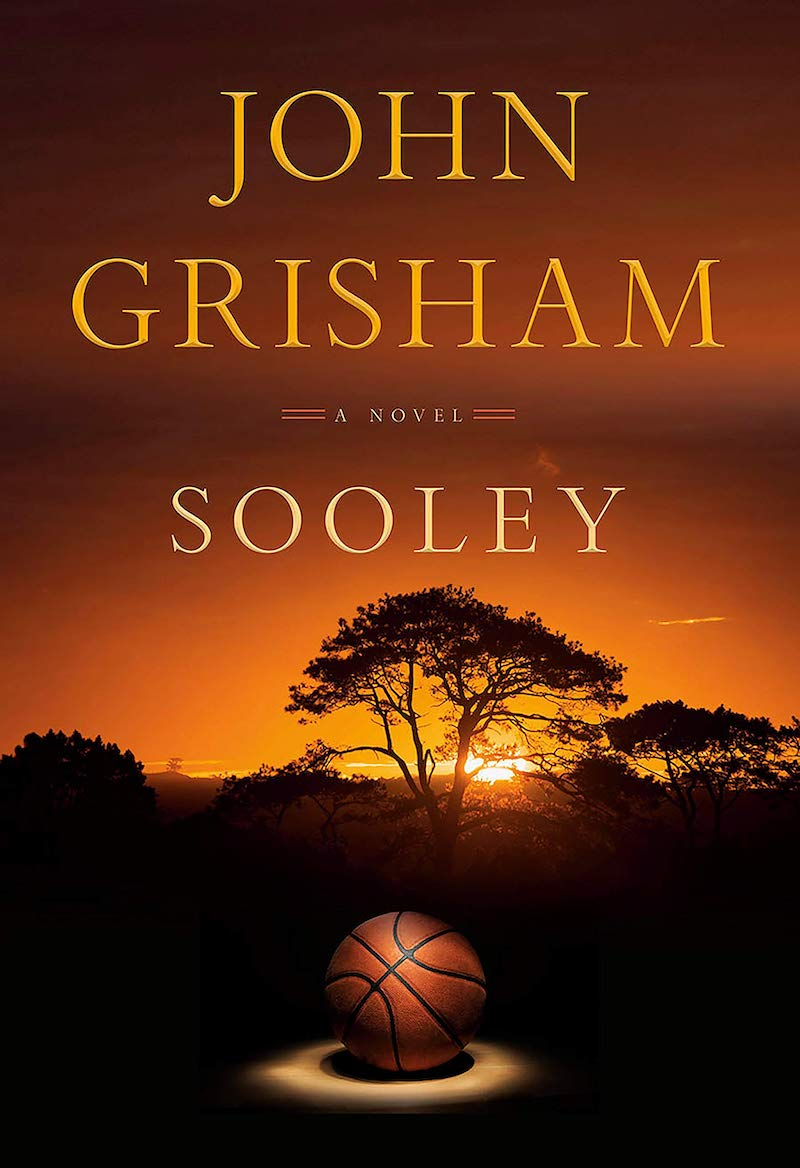 John Grisham, the king of legal fiction, making a list of favorites basketball books?  I know, I know – you aren’t going to read this book and feel like you suddenly understand the history of the Patriot League, or have insights into the mind of Michael Jordan.  But in a world that feels as divisive as ever, I found Grisham’s story a refreshingly (and mostly) hopeful distraction.

Sooley tells the story of Samuel Sooleyman, a teenager from Sudan who picks up basketball late in his teen years, just as he’s growing into a 6-foot-7-inch frame.  Sooleyman, or ‘Sooley’ as he’s quickly tagged, gets a once-in-a-lifetime chance to showcase his skills in the U.S. as part of a traveling team, all while his family is facing war in his home country.

For the majority of the novel, Grisham expertly balances the miraculous and meteoric rise of Sooley as a freshman at the MEAC’s NC Central University with the horrendous human atrocities facing his refugee family in Africa.  And though he places the titular character in a number of dicey situations, Grisham manages (for the most part) to leave you repeatedly optimistic that an underdog’s story like Sooley’s could actually happen in today’s tumultuous climate.

I also added this book to my favorites list because I love the backstory that goes along with it.  Grisham, a well-known fan of Virginia basketball, took inspiration for his lead character from former Cavalier and National Champion Mamadi Diakite, and consulted with (among others) Tony Bennett, a man Grisham called his “hero.”  All of that research and attention to detail gives the book a strong sense of realism, and though I could nitpick in a place or two (like Florida being a 16-seed?  Come on, John!), Grisham’s deft touch catapulted this novel onto my favorites list.