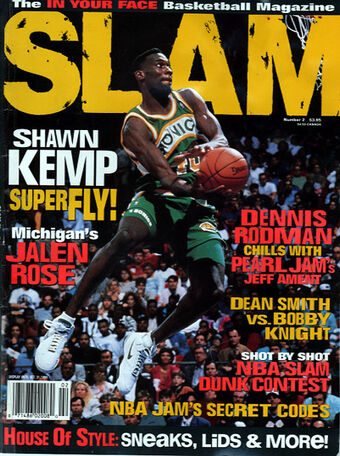 Twenty-six years ago, a basketball-centric magazine appeared on newsstands for the first time. Clad in the Charlotte Hornets road teals, a large-muscled Larry Johnson skied under the new magazine’s red-blocked title: SLAM.

Today, despite the media landscape’s continued transformation from print to web to mobile, SLAM continues to fly, a testament to its on-the-pulse content and one-of-a-kind vibe.

An edgier, more youthful, hip-hoppy alternative to Sports Illustrated, sport media’s dominant print player in the early 1990s, SLAM aimed to appease those with a serious basketball addiction and billed itself as “the basketball Bible.”

Then, it delivered on that ambitious boast.

While profiling hoop stars from the playgrounds and prep ranks up to the NBA, SLAM also embraced the totality of basketball-related culture. Its stories on sneakers, apparel, and streetstyle spoke to its unrelenting commitment to all things basketball and those who lived the game.

“We’re not the hoop magazine for the 45-year-old couch potato,” SLAM director of advertising and promotion Ronnie Zeidel said of the upstart magazine in 1998.

Long before Twitter and Instagram, SLAM’s stories provided behind-the-scenes glimpses into the game’s stars – Jordan, Shaq, Kobe, and AI – while its vivid action shots and creative candids captured the spirit of the game and those who played it with an unapologetic, irreverent filter. One media observer described SLAM as the People magazine of basketball because it didn’t take itself too “seriously.”

Which isn’t to say SLAM didn’t – and doesn’t – carry some serious weight. When SLAM ranked Carmelo Anthony as the 15th best player in the NBA in 2016, the then 32-year-old New York Knickerbocker shot back on Instagram: “don’t play yaself.” Melo’s response, however subtle and seemingly innocuous, served a reminder of SLAM’s continued cultural heft – even among perennial NBA All-Stars.

Amid the NBA free agency euphoria of 2010, SLAM made waves when its cover art included Lebron donning a Knicks uniform and Dwayne Wade sporting the Chicago Bulls white-red-and-black kit. The dueling covers characterized the rampant speculation blanketing a summer free agency market that culminated in “The Decision” and the Heatles era.

Earlier this year, SLAM celebrated another first when it put UConn women’s recruit Paige Bueckers on its cover, the first female high school talent to grace the publication’s cover. It coincides with SLAM’s increasing focus on the women’s game and reminds that SLAM continues to evolve and monitor the pulse of the game.

Make no mistake, SLAM remains an important player in basketball culture and a go-to resource for what’s really resonating on the hardwood, the blacktop, and everywhere in between. SLAM, like its initial cover boy, isn’t about grace or subtlety. It’s powerful and bold and, 26 years later, still the pulse of basketball culture.