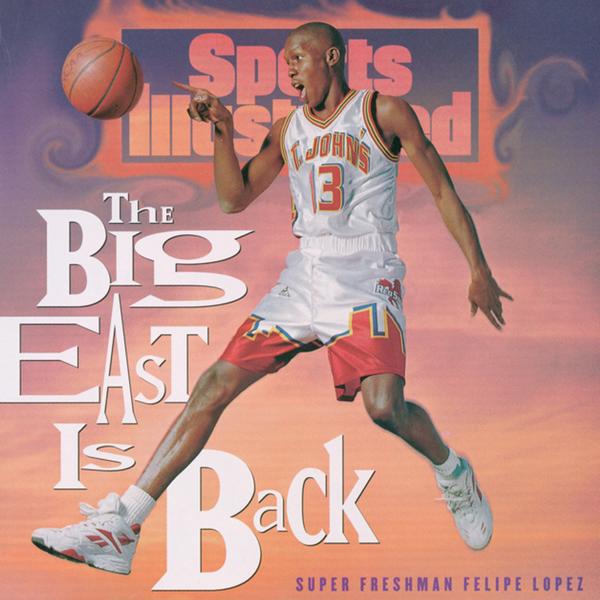 Months before St. John’s took the Alumni Hall court for its 1994-1995 season opener against Dartmouth on Nov. 25, 1994, the wheels of change were beginning to spin.

On the heels of inking high-school All-American Zendon Hamilton, a consensus top 10 player in the Class of 1994, Mahoney signed prep phenom Felipe Lopez. A three-time All-American at New York’s Rice High, Lopez, who paired mad hops with a magnetic smile, selected St. John’s over Seton Hall, Kansas, UCLA, and Florida State as well as a reported $400,000 deal to play in Spain. Fairly or not, the local hoops prodigy was viewed as a savior for the fading St. John’s program.

“I’ve probably never seen a coach cry before,” Lopez said of telling Mahoney of his commitment. “He jumped out of his chair. He looked like he was crazy or something.”

In the 1920s, St. John’s, a Catholic university located in Queens, N.Y., adopted the name Redmen for its athletic teams that donned red uniforms. Over time, the once-innocuous nickname embraced a Native American vibe, including the emergence of a warrior-like Native American in headdress as the team’s logo.

As the 1990s began, and conversations about political corrections accelerated across the country, debates about the appropriateness of the Redmen name – one viewed in many corners as a slur against Native Americans – and the associated imagery intensified. University leadership canned the mascot in 1991 and soon after launched a committee to investigate a new nickname.

To be certain, St. John’s wasn’t alone as other universities and sports team came under fire – from baseball’s Cleveland Indians and football’s Washington Redskins to universities like Stanford and Marquette, which shifted from the Indians and Warriors to the Cardinal and Golden Eagles, respectively. Then-St. John’s president Rev. Donald Harrington told the university’s newspaper that the decision to change the school’s nickname was “made for us.”

“You can’t keep a nickname that increasingly more and more newspapers and radio stations won’t allow because it’s seen as offensive,” Harrington said.

In June 1994, St. John’s unveiled its revised identity, officially ending the Redmen era. St. John’s adopted the name Red Storm and a bellowing red horse as its mascot. (St. John’s ditched the horse in 2009 in favor of Johnny Thunderbird, a mythical bird.)

With Lopez & Co. and a new nickname, St. John’s then unveiled its new basketball uniform.

The fire-red shorts were an immediate attention grabber and among the most distinctive uniforms ever worn on a college basketball court. During a pre-season game against a Russian squad, a New York Times reporter remarked that the Red Storm “looked comfortable in new, gaudy” uniforms, though many others appreciated St. John’s stepping out of the box with an over-the-top design unapologetically rooted in place. St. John’s, after all, was – and remains – New York’s marquee college program.

(Not to be outdone during the 1994-95 season, Villanova worked to match the fashion-forward look of its Big East counterpart with its own outlandish kit inspired by a reworked logo, color scheme, and focus on branded merchandise.)

Through November 27, 1994, St. John’s name change and new on-court look was largely a regional news story with only modest national coverage. All that changed when the November 28 issue of Sports Illustrated dropped. There, Lopez, donning St. John’s new white kit, appeared on the cover, leaping over the New York City skyline with the Hudson River and Statue of Liberty serving as the backdrop. “The Big East Is Back” blared the cover headline, celebrating Lopez’s arrival at St. John’s as a new era for the basketball-rich conference.

The Michael O’Neill-shot image remains one of Sports Illustrated’s most memorable, iconic covers – and one that immediately raised expectations for Lopez and St. John’s. “We knew all eyes were going to be on us after the Sports Illustrated cover,” Zendon Hamilton later opined.

Lopez, a U.S. immigrant from the Dominican Republic, admitted he didn’t necessarily understand how one photo, albeit a cover photo for the nation’s premier sports magazine, would so emphatically push him into the national spotlight and swing expectations to even greater heights.

“We just thought it was another great cover photo like some of the other magazine covers I had done,” Lopez said.

It wasn’t, of course.

“I feel like I got isolated after the cover,” Lopez recalled. “Like it was Felipe versus the Big East.”

While St. John’s began the 1994-95 campaign 7-0, albeit over a marginal slated that included only one Power 5 foe in Pittsburgh, the Red Storm won only two of their next 12 games and struggled to a 14-14 record and a first-round NIT loss to South Florida. Lopez played four years at St. John’s before embarking upon a four-year NBA career. His life is chronicled in the ESPN 30 for 30 documentary “The Dominican Dream.”

Though St. John’s banished their skyline-themed uniforms after three seasons, the legacy of the daring design continues to inspire on-court attire. NBA teams such as the Dallas Mavericks have trotted out special-edition uniforms carrying Dallas’ skyline while the University of Illinois-Chicago (UIC) debuted a daring baby-blue kit in January 2019 that featured a navy silhouette of the Chicago skyline running along the bottom of the shorts.